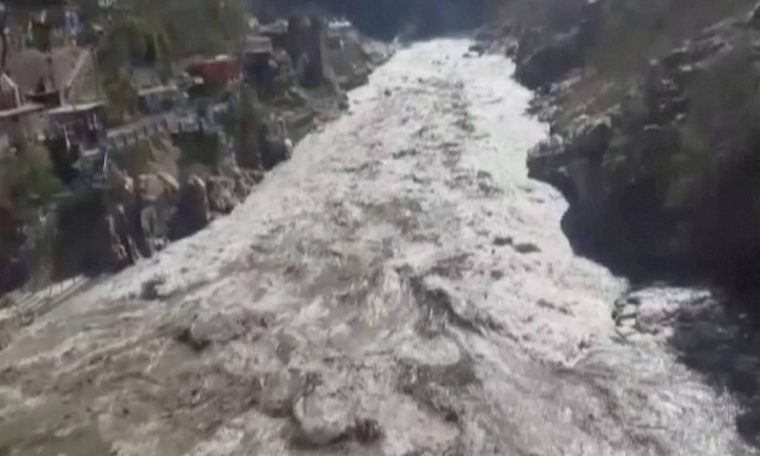 At least 125 people have gone missing after a glacier in Himalaya mountain range, In northern India, produces an avalanche on this Sunday (7). The landslide hit a hydroelectric plant and the floods forced residents of nearby villages to leave their homes.

According to witnesses, avalanches rose from the Rishiganga valley to the mountains of Uttarakhand, creating clouds of dust, stones and water. “It was too fast and there was no time to alert anyone,” says Sanjay Singh Rann, a resident of Raini’s village. “I figured we’d be wiped out,” he says.

The disaster occurred at a distance of 500 km from the capital New Delhi.

By the time the search closed overnight, seven bodies had been found and between 125 and 200 reported missing by local authorities. According to Minister Trivendra Singh Rawa, this number may increase. Most of the disappearances are workers of the Rishiganga hydroelectric plant, which have been destroyed by the breaking of the glacier.

State police chief Ashok Kumar said an emergency operation was launched to try to rescue 17 people trapped in a tunnel. Kumar had earlier mentioned the possibility of only 200 missing due to electric current.

Indian Prime Minister Narendra Modi took to social media to say that he was monitoring the rescue operation. “India supports the population of Uttarakhand and the entire nation prays for the safety of all in the region,” he wrote on Twitter.

Eyewitnesses filmed the moment the flood destroyed parts of the Rishiganga Dam and everything else in its path, such as machinery and construction materials. At least 180 sheep were swept away by the flood.

Authorities were forced to evacuate the dams to prevent flooding, the waters of which reached the Ganges, and prevent residents from reaching the riverbank.

The mountains of Uttarakhand are vulnerable to landslides. This Sunday’s avalanche has already reiterated warnings by environmentalists and officials that it is necessary to review projects for hydropower plants in the area, which are ecologically sensitive.

It is not yet known what caused the glacier to burst and the avalanche. But this is not the first time that the region has faced a similar disaster.

In 2013, the monsoon season (seasonal winds that carry moist air from the sea to the continent, causing heavy rains) caused floods in Uttarakhand, killing 6,000 people. The devastation was named “Himalayan Tsunami”.

Due to the case, environmental activist and former Water Minister, Uma Bharti, now the leader of President Modi’s party, criticized the construction of power plants in the area.

Bharti said on social media, “When I was a minister, I had asked that plants cannot be built on the Ganges and tributaries.”

Environmental experts say Sunday’s avalanche requires that all plans to build plants in the area be reviewed.

“The government cannot ignore the warnings and needs to stop building hydroelectric plants and highways in a fragile ecosystem,” said Ranjan Panda, a volunteer at the Ombat NGO Climate Change Network.