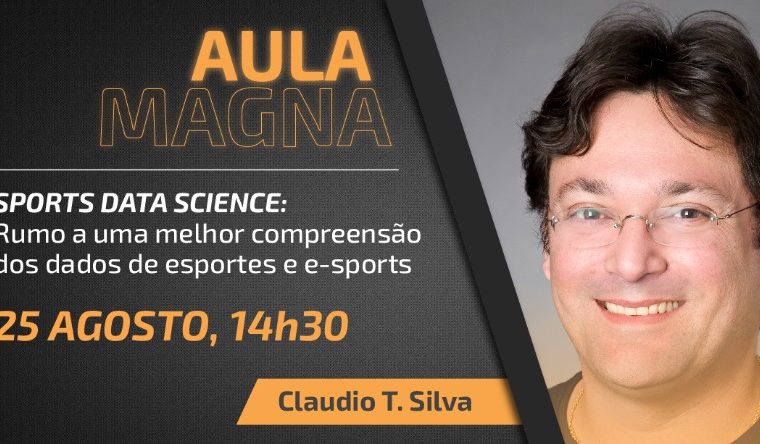 He helped revolutionize the way the United States enjoyed baseball, one of the country’s most traditional sports. By building an advanced tracking tool used by the main North American sports league, Major League Baseball (MLB), Brazilian Claudio Silva won the country’s media pages and, in 2018, received an Emmy Award for Technology and Engineering from the National Sports Federation. Academy of Television Arts and Sciences, National Academy of Television Arts and Sciences (NATAS).

A professor at New York University and a scientist specializing in computing, engineering and data science, Silva is the guest of a special event: the solemn opening of the monuments of 50 Years of the Institute of Mathematics and Computer Science at the USP in So Carlos. The initiative will take place on 25 August at 2:30 PM, when the professor will teach Aula Magna for a better understanding of data science in sports, which will be broadcast on ICMC TV channel on YouTube at this link: https://youtu.be/ATwK_rk2kfw.

Open to the participation of all interested parties, the initiative does not require prior registration. During the event, Silva will report on the trajectory that made him one of the people responsible for changing the way teams, athletes, fans, and experts watch baseball, in addition to revealing that other sports are set to revolutionize. how technology can be used.

“Although there has always been interest in analyzing sports data, this area of ​​research has received a lot of attention in recent years, due to the recognition of the importance of statistics and the prevalence of available data,” explains Silva. From 2012 to 2017, he served as a senior consultant for a system employed by MLB, which consists of multiple high-performance cameras installed at various key points in stadiums, with software that generates highly interactive views of games, such as providing unprecedented details. Capture images (30 frames per second) of each player and the ball’s entire trajectory. All these data allowed us to understand the game on the field from a new perspective and create new metrics for evaluating clubs, scouts, players and fans.

See also  A few days before the Copa America, the women's team will play friendly with Sweden

Silva explains that we are currently experiencing a new scenario in this area: “Instead of the previous scarcity, analysts now have access to volumes of highly accurate game data. This data deluge can be used for machine visualization and learning.” The development of new tools is required, leading to major challenges in sports data science.”

The professor also points out that the reality of electronic sports (e-sports) is also beginning to change due to the growing avalanche of access to data. Therefore, during the lecture, Silva will also explain what are the new approaches to analyzing data directly from the video and what are the new player evaluation techniques.

The inauguration of Oula Magna will be the responsibility of the ICMC Director, Professor Maria Cristina Ferreira de Oliveira. The event will be mediated by Professor Gustavo Nonato, who will forward questions sent by the public to Professor Claudio Silva via chat.

The celebrations will start this year and will go on till December 2022. To begin the celebrations, a visual identity was created, composed of an official logo for the fiftieth anniversary, a commemorative stamp and the motto: “recognizing the past and projecting the future”.