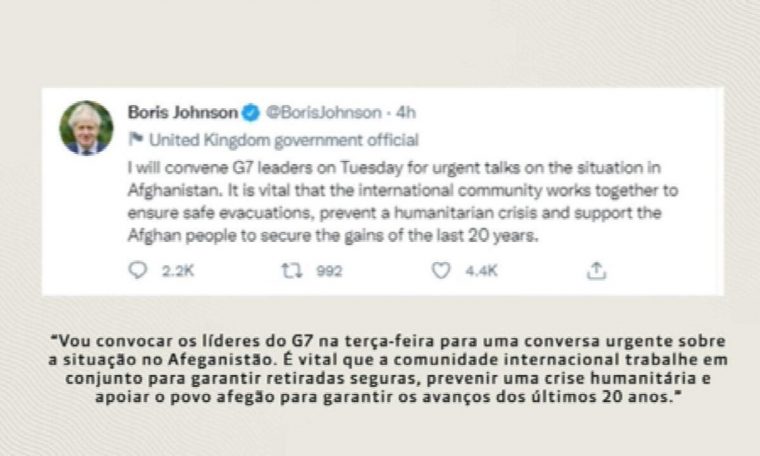 Prime Minister Boris Johnson will ask US President Joe Biden to extend the deadline for the evacuation of people from Afghanistan.

Johnson said he has called a virtual meeting of G7 leaders next Tuesday (24) To discuss the crisis in Afghanistan and urged governments to find ways to prevent the situation from worsening. The UK has a rotating leadership of the G7, which also includes the US, Italy, France, Germany, Japan and Canada.

“It is vital that the international community work together to support the Afghan people to ensure a safe return, avert a humanitarian crisis and secure the rights they have earned over the past 20 years,” Johnson said on Twitter on Sunday (22). ”

Britain’s Armed Forces Minister James Happy said there were still around 4,000 people eligible to immigrate to the country. Initial US plans are for a troop withdrawal to expire on August 31.

“We learned last week that the planned deadline is not always entirely within our control,” said Happy. He said that the longer the time, the greater the number of people evacuated from Kabul.

VIDEO: Understand the history of the power struggle in Afghanistan

This Sunday (22), the United Kingdom’s Secretary of Defense, Ben Wallace, wrote a column in the Daily Mail and pointed to the possibility of asking the United States to extend the deadline already set for leaving Afghanistan.

this Monday, One Afghan soldier was killed and three others were injured in the shootouto With unknown armed men.