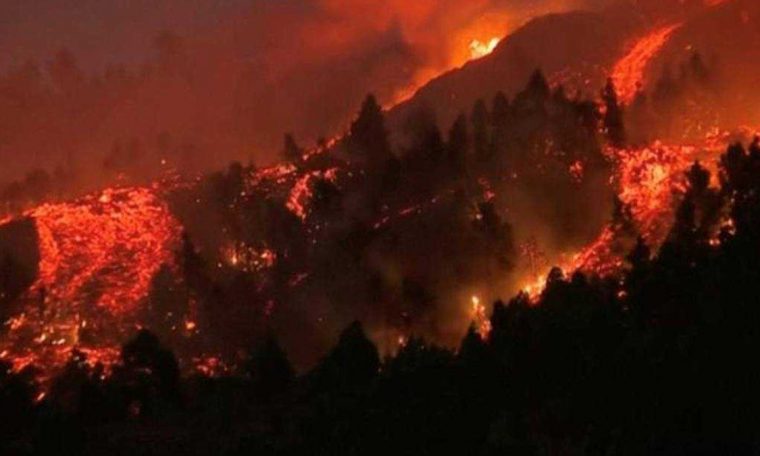 a Cambre Vieja Eruption in La Palma, Spain
The volcano is also expected to affect countries on the African continent, after the volcano emitted large amounts of sulfur dioxide, a highly toxic gas.

The chemical compound should reach Portugal, Spain and the part of the Iberian Peninsula made up of almost the entire length of Morocco and Tunisia, and according to the Copernicus satellite system could reach the coasts of France, Italy, Algeria and Libya. European Union (HUH).

hey The colorless gas when in contact with the human body can irritate the airways and even cause breathing difficulties.
. In some cases, it can also cause irritation of the skin, mucous membranes, cough and nausea.

According to a picture published in the official account of the monitoring system, it is forecast that sulfur dioxide will be present in the atmosphere next Friday (24). High indices of the substance will be observed along the Moroccan Atlantic coast, the Spanish Mediterranean coast, southern Sardinia, northern Sicily and the Tunisian coast.

To a lesser extent, the compound will be seen in half of Spain, the south of France, the west coast of Italy, the French island of Corsica and the entire Mediterranean coast of Africa, as well as the interior of Morocco, Algeria. , Tunisia and Libya.

On Tuesday (21), AEMET (the state meteorological agency) detected the arrival of sulfur dioxide with peaks of up to 20 parts per billion, 400 times above the “normal value” in that region, at an altitude of 2,371 meters. Izana Atmospheric Research Center in Tenerife. A spokesman for the agency said, however, that the quantity “does not pose a health risk” because it is “a specific measure” and because it is “within the limits of good air quality”.

In addition to the change in wind, acid rain is also forecast for the next few hours over the Canary Islands, where the island of La Palma is located. volcanic eruptions
, Spanish AEMET . informed to

Agency spokesman Rubén del Campo said the possibility of acid rain in the north and east had not yet been ruled out. canary islands
, which are more mountainous areas.

The phenomenon must be due to the high concentration of sulfur dioxide emitted, which can form sulfuric acid upon exposure to the atmosphere. However, these rains will be weak and scattered.

— with information from the EFE agency