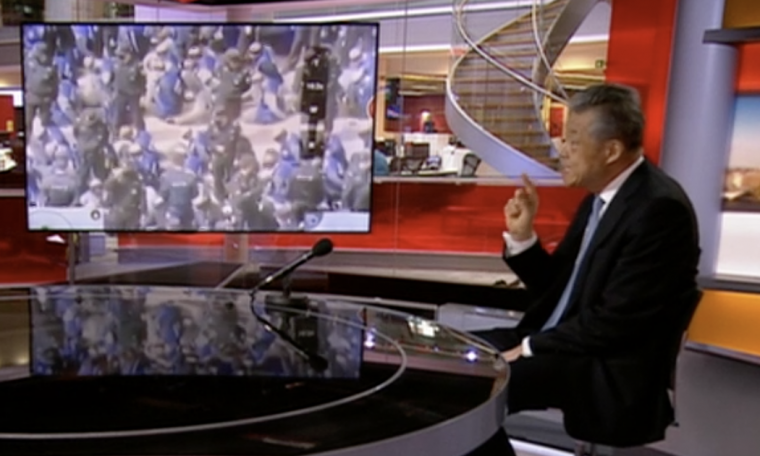 China’s ambassador to the UK repeatedly denied human rights violations against Uighur Muslims – despite being shown shocking video of detainees.

He also denied there was a “massive” campaign of forced sterilisation of the minority group, but said he “cannot rule out single cases.”

A year-old video, which appears to show hundreds of Uighur Muslims bound, blindfolded and lined up on their knees waiting to be pushed onto trains in Xinjiang province, has circulated online in recent days.

Ambassador Liu Xiaoming was shown the video during an appearance on the BBC’s Andrew Marr programme.

But he refused to accept that it showed Muslims being loaded on to trains to be taken to alleged concentration camps in the region.

“I don’t know where you get this tape,” he insisted.

“Sometimes there are transfers of prisoners.”

He added: “There is no such concentration camp in Xinjiang.”

Shown a second video, where a named Uighur Muslim woman told a distressing story of being forcibly sterilised in Xinjiang.

Ambassador Liu said there was no “massive forced sterilisation” in China, and that it was not “government policy.”

But he said he could not “rule out single cases.”

He also said Amnesty International is “not respected in China” because they “never say a nice word.”

Asked whether the treatment of Uighurs amounted to genocide, Foreign Secretary Dominic Raab said: “Whatever the legal label, it’s clear there are gross, egregious human rights violations going on.”

He said it was “deeply, deeply troubling” and the reports of sterilisation and camps was “reminiscent of something we have not seen in a long, long time.”

He said the UK wanted a “positive relationship” with China, but that we will “call out” violations “albeit with our partners in the right way.”

Ambassador Liu warned Beijing will make a “resolute response” to any moves by Britain to sanction Chinese officials for human rights abuses.

The Government is facing calls to impose sanctions on individuals involved in the oppression of the Uighur people.

But he said that was “totally wrong” and warned the UK not to become involved in a “tit-for-tat” exchange with Beijing.

He added: “You have seen what happened between China (and) the United States. They sanctioned Chinese officials, we sanctioned their senators, their officials.

“I do not want to see this tit-for-tat between China-US happen in China-UK relations.

“I think UK should have its own independent foreign policy rather than dance to the tune of the Americans like what happened to Huawei.”