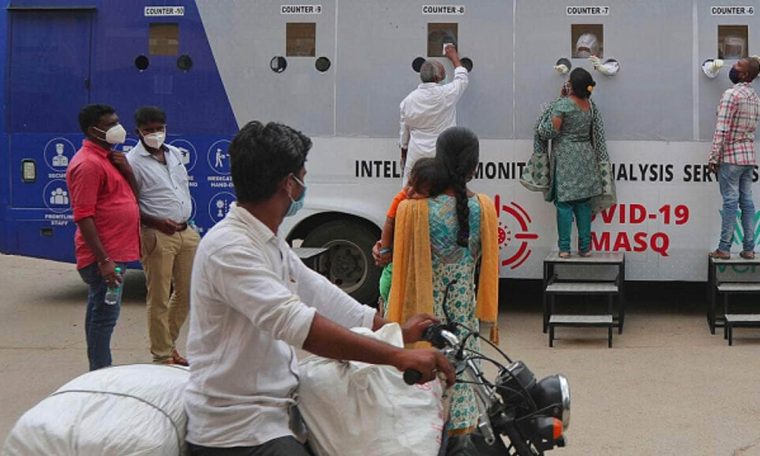 Coronavirus LIVE Updates: Haryana chief minister Manohar Lal Khattar on Monday said he had tested positive for coronavirus, days after he had tested negative for the infection after Union Minister Gajendra Singh Shekhawat was found to be COVID-19 positive.

Coronavirus LATEST Updates: Haryana chief minister Manohar Lal Khattar on Monday said he had tested positive for coronavirus, days after he had tested negative for the infection after Union Minister Gajendra Singh Shekhawat was found to be COVID-19 positive.

The number of coronavirus positive cases reported so far in the country crossed 30 lakh on Sunday, just 16 days after it crossed 20 lakh. The toll rose to 56,706 with 912 fatalities reported in 24 hours, said the health ministry in its morning update.

It took 110 days for COVID-19 cases in the country to reach one lakh.

The recovery rate among coronavirus patients neared 75 percent, while the case fatality rate dipped to 1.86 percent, which is among the lowest in the world, the ministry claimed.

Information and Broadcasting Minister Prakash Javadekar announced standard operating procedures (SOPs) for resuming shooting of films and TV programmes. The new guidelines include measures such as social distancing and mandatory use of face cover or masks for cast and crew, except for actors in front of camera.

In Madhya Pradesh, health minister Prabhuram Choudhary said he has tested coronavirus positive. Choudhary is the seventh minister in the state, besides Chief Minister Shivraj Singh Chouhan, to have tested positive for the viral infection. Meanwhile, Delhi reported its highest single-day spike in August with 1,450 new cases.

The Union health ministry on Sunday said the average daily number of recoveries is on a “constant upward move”, even as the total confirmed COVID-19 cases in the country climbed to 30,44,940 after a spike of 69,239 fresh infections.

The average daily recoveries have steadily increased from 15,018 between1 and 7 July to 60,557 between  13 and 19 August, the health ministry said. The total recoveries exceed the active cases by nearly 16 lakh (1,572,898) and the national recovery rate has gone up to 74.90 percent, it said in a statement.

According to the Indian Council of Medical Research(ICMR), a cumulative total of 3,52,92,220 samples have been tested up to 22 August, with 8,01,147 samples being tested on Saturday.

With over eight lakh tests being conducted for the eighth consecutive day, the average daily positivity rate has come down from 9.67 percent during 3-9 August  to 7.67 percent over the last week. the ministry said.

The Centre on Sunday announced SOPs for resuming shooting of films and TV programmes to contain the spread of COVID-19. Union minister Prakash Javadekar asserted that the guidelines will facilitate resumption of shooting and provide employment to scores of people in the film industry who were affected in the wake of the pandemic.

Sharing details of the SOPs, Javadekar said barring those who are in front of cameras, all others will have to wear masks.

The I&B ministry’s SOPs state that physical distancing of at least six feet to be followed as far as feasible at all locations at all times, while sitting, standing in queues, among others. These include places such as shoot locations, sound recording studios and editing rooms.

Aspects such as scenes, sequences, set-ups, camera locations, positions of various crew members, seating arrangements, food and catering arrangements, staggered meal timings should be planned while giving due consideration to physical distancing norms, according to the document.

Measures should be taken by the production team to involve a minimum number of cast and crew members during the shoot, the SOPs said.

Visitors and audiences should not be allowed on sets and for outdoor shooting, necessary coordination with local authorities should be ensured to minimise and manage the spectators, they said.

Resting or stay-over facilities should be planned while adhering to physical distancing guidelines, according to the document.

Staggered call and pack-up timings for different production units should be ensured by studios having multiple sets, the SOPs added. “There shall be designated entry and exit points for all shoot locations and other workplaces,” the document said.

Sanitisation, to the extent possible, before and after the shoot should be done, the SOPs said.

Shooting of films and TV serials can be resumed using these SOPs, Javadekar said.

India may get vaccine by year-end if everything goes well, says Harsh Vardhan

Union Health Minister Dr Harsh Vardhan has said that if everything goes well, India would get a vaccine against COVID-19 by the end of this year.

Three COVID-19 vaccine candidates, including two indigenous ones, are in different phases of development in India. The phase-one human clinical trials of the two indigenous COVID-19 vaccine candidates, one developed by Bharat Biotech in collaboration with ICMR and the other by Zydus Cadila Ltd, have been completed and the trials have moved to phase-two, ICMR Director General Dr Balram Bhargava had said recently.

The Serum Institute of India, which has partnered with AstraZeneca for manufacturing the COVID-19 vaccine candidate developed by the University of Oxford, is likely to begin phase two and three human clinical trials next week.

Meanwhile, several states added new cases and fatalities to their tallies. Delhi registered 1,450 new coronavirus cases on Sunday, the city’s highest single-day spike in August, taking the total cases to over 1.61 lakh while the toll mounted to 4,300.  The positivity rate stands at 7.74 percent, while the recovery rate is 90.04 percent.

See also  Brazil is 58th in global ranking and 4th in total dosage.

The COVID-19 caseload of West Bengal went up to 1,38,870 after with 3,274 new infections, the highest in a day, the health department said. The toll due to the disease also rose to 2,794 with 57 more people succumbing to the viral infection, the department said in a bulletin. Since Saturday, 3,048 patients have recovered from the disease and the number of active cases is now 28,069, it said.

Odisha too registered its highest single-day surge of 2,993 COVID-19 cases and 10 more deaths due to the infection. With this, the state’s toll has mounted to 409 and the infection count reached 78,530, a health official told PTI. Fifty-three other coronavirus patients have also died, but the cause of their deaths was attributed to some other reasons, the official said.

Maharashtra reported 10,441 new coronavirus positive cases, which pushed the cumulative total in the state to 6,82,383. With the death of 258 patients during the day, the toll climbed to 22,253.

In Madhya Pradesh, Health Minister Prabhuram Choudhary tweeted that he has tested positive for COVID-19.

“My COVID-19 test report came out positive. I request those who had come in my contact to undergo a coronavirus test. Those in close contact should quarantine themselves,” he tweeted. “With your prayers and blessings, I will return amidst you soon to serve the people,” he said.

With inputs from PTI