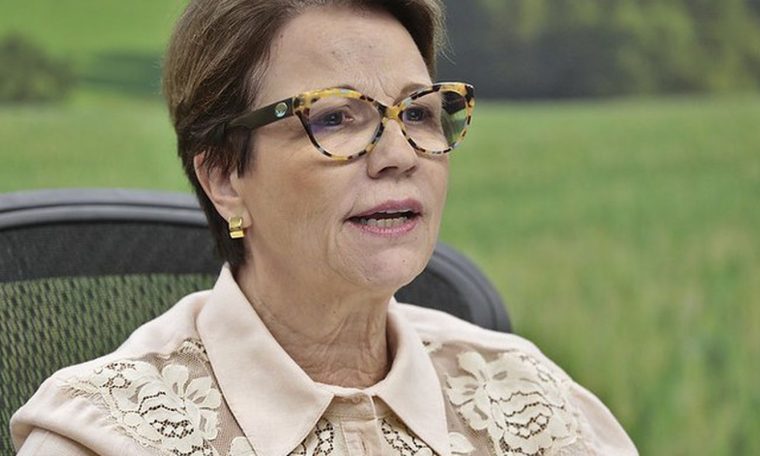 Minister of Agriculture, Livestock and Supplies, Tereza Cristina said today (2) that Brazil could be the main player for the greenest investment in the world and its portfolio is working towards that goal. According to the minister, the analysis of the data declared in the Rural Environment Registry (CAR) by helping to implement the Forest Code has the potential to increase the resources of the country in managing the green cover.

“Currently, the country is estimated to have $30 billion in green bond management, with great growth potential, compared to US$1 trillion in resources invested in the International Permanent Fund. Brazil could be the main player For green investment in the world, and the ministry is working and supporting it”, the minister said.

In her participation at the 20th Brazilian Agribusiness Congress, Tereza Cristina highlighted the “single policy” that should be defended by all South American and Caribbean countries agreed upon at the Food Systems Summit scheduled for September at the United Nations Headquarters.

The minister said that Brazil has been able to reconcile productivity with sustainability in the agricultural model it is developing. He recalled that the Brazilian Forest Service is under its “umbrella” and progress in implementing the Forest Code is among the folder’s priorities.

According to him, legislation would be necessary for the country to become a leader in the global sustainability agenda, while reconciling agricultural production with environmental protection.

Tereza Cristina highlighted that this year’s cropping plan is “greener,” expanding both the Low-Carbon Agriculture Plan (ABC Plan) and funding for forest restoration. from biogas and biomethane.

“It is important to emphasize that Brazil has developed a tropical agriculture model. As it becomes more productive, it also becomes more sustainable. Over the past 10 years, we have implemented a low-carbon agriculture scheme, by our ABC plan. About 50 million hectares of bad areas have been accelerated with promoted technologies”, the minister said.

In a message sent to the participants of the 20th Brazilian Congress of Agribusiness, the Minister of Infrastructure, Tarício Gomes de Freitas, said that infrastructure should move towards “meeting the needs of agribusinesses”, and that it is important in agribusiness and infrastructure. Essential for investors. To meet the needs of social and environmental governance standards.

“For this reason, we have invested in a transport diversification matrix by promoting cabotage transport, promoting waterway transport, and a comprehensive railway program that has already contracted approximately $30 billion in investment with the private sector. Is.

In addition, we are bringing the notion of sustainability into the structure of our projects. We understand that financial flows will increasingly be linked to environmental standards”, Freitas said.

Having just arrived from Rome, the Italian capital, where she attended the preliminary meeting of the Food Systems Summit, which will take place in the United States in September, Tereza Cristina stated that “for the first time a single policy has been defended. all countries of South America and the Caribbean”, and that this position has been embodied in 16 key messages to be presented at the event organized by the United Nations.

“Our association was very important so that there could be 16 common points in the agenda to be debated and launched in September,” the minister said. The messages address topics such as the transformation of agricultural food systems, consumer demand and nutritional aspects, production strategies and environmental issues, and America’s role in this context.

To know the 16 general points in detail, Click here.