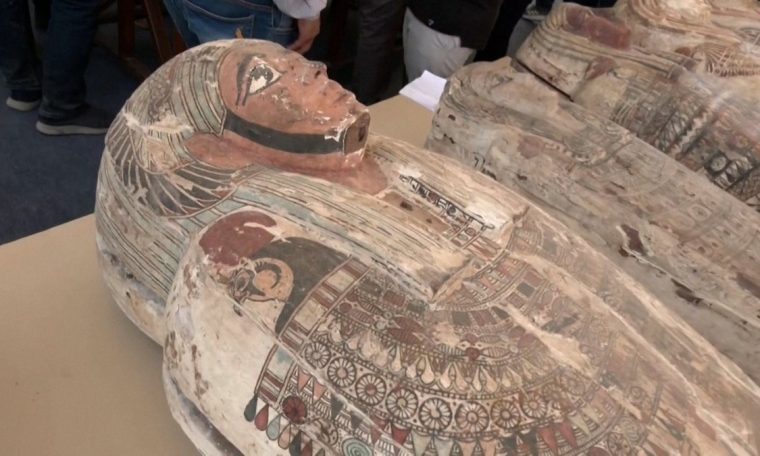 hey Egypt Submitted on Monday (30) 250 sarcophagi and 150 bronze statues in Saqqara CemeterySouth of Cairo, the latest in a series of remarkable discoveries in the region.

The site of Saqqara, about 15 kilometers south of the famous pyramids of the Giza Plateau, is part of the UNESCO World Heritage List and is known for the famous stepped pyramid of Pharaoh Djoser.

Sarcophagi painted from 500 BC with mummies found in Egypt – Photo: Associated Press

Built by the architect Imhotep in 2,700 BC, this monument is considered to be one of the oldest in the world.

One of the 150 sculptures discovered at the site is that of the architect, vizier and physician Imhotep.

More than 250 sarcophagi have been found during excavations in Egypt.

Imhotep, the inventor of the carved stone construction, called “revolutionary architecture” in the ancient world, Mustafa Vaziri, director of the country’s Supreme Council of Antiques, told the press on Monday.

“Finding Imhotep’s tomb” is one of the main goals of the archaeological mission, which has already completed four seasons of archaeological exploration at the site, Vaziri said.

In addition to the statue of Imhotep, others in bronze representing the gods of the Egyptian gods “Osiris, Isis, Hathor, Amon Min, Nefertum and Anubis” were unveiled, the Ministry of Tourism and Antiquities said in a statement.

And “250 wooden sarcophagi with mummies” from the 5th century BC Vaziri said, were also found.

In one of them, an “intact” and “sealed” papyrus found by archaeologists was immediately transferred to the laboratory of the Egyptian Museum in Cairo’s Tahrir Square, to be restored and analyzed.

According to the director, about nine meters long, the papyrus certainly contains chapters from the Book of the Dead.

Vaziri said the sarcophagi will be moved to the new “Grand Egypt Museum” near the Giza Plateau, which Egyptian authorities expect to open this year after several delays.

Archaeologists and journalists look at sarcophagi found in Saqqara, Egypt, on May 30, 2022. — Photo: Associated Press

In January 2021, Egypt He had already discovered new archaeological “treasures” at Saqqara, among them 50 New Kingdom sarcophagi, more than 3,000 years old.

Officials assured that these discoveries would facilitate “rewriting history” of the period.

Cairo relies on new discoveries to restart tourismaffected by covid-19. The sector, which employs two million people and accounts for more than 10% of GDP, has been affected since the Arab Spring of 2011.