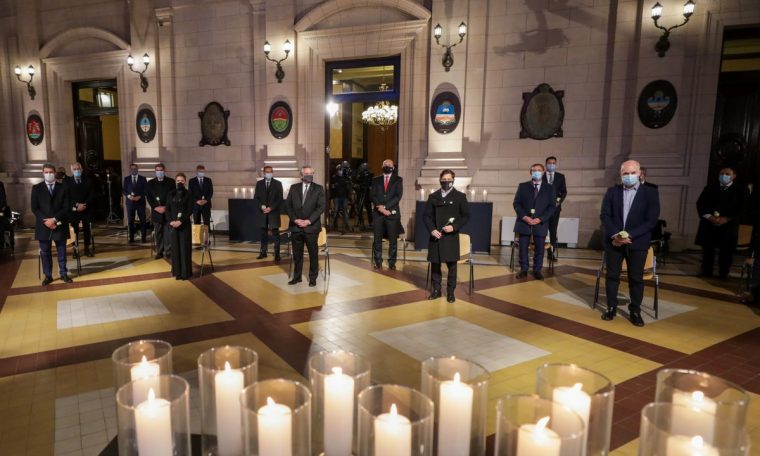 President of Argentinahandjob Alberto Fernandez, honored by the nearly 100,000 people killed this Sunday (27) COVID-19 In the country, at an event at the Kirchner Cultural Center (CCK) with representatives of various religions, indigenous peoples and the Afro-Argentine community.

“It is a ceremony of remembrance and reflection in honor of those who died of Covid-19, this pandemic that ravages humanity,” said the president, the only speaker in the tribute.

“The millions of people who have died so far have shocked the whole world. Just as the nearly 100,000 dead in our country challenge us in the deepest part,” he said.

In the presence of almost all the governors and the first lady, Fabiola Yánez, Fernández, along with some children, 24 candles lit in honor of coronavirus victims in 24 provinces of Argentina, after a minute’s silence.

“The virus is invisible, but it is aggressive, destructive and causes great pain,” the president said.

At the end of the ceremony, Each of them placed a white rose near the candles., listening to “Adios Nonino” by Astor Piazzola.

as it was representative of all religious beliefs, indigenous peoples and the Afro-Argentinian community, The music played ranged from lyrical to tango, from folklore to rock, while actress Laura Novoa recited poems from famous Argentine writers.

“Our tribute, after passing through this time of pain, will be to build a united and united Argentina, which will always take care of the health of its inhabitants. (…) care, recover, rebuild, so that we may see memory and hope With for the future,” Fernandez said.

According to official figures, since the start of the pandemic in March 2020, Argentina has recorded nearly 4.4 million infections and 92,317 deaths from Covid.

In recent weeks, Argentina has ramped up vaccination campaigns and 19.7 million (44%) of its 45 million residents have had at least one dose of the country’s various vaccines. Meanwhile, according to official figures on Sunday, 3.9 million received the two doses.