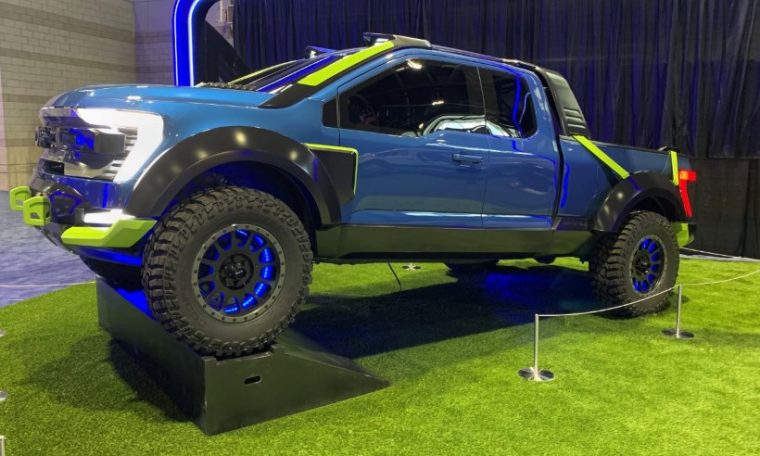 Mixing reality with fantasy has always been a practice present in the world of cinematographic productions and electronic games. But this time, Ford decided to be inspired by the virtual universe to build, feel, and even drive a real model. It’s the Ford F-150 Rocket League Edition, a crude-style pickup truck that jumped from the game screen into the real world.

The model was presented in the United States at the Chicago Auto Show, the first exhibition in the region opened to the public a year and a half later. And to include the “character” of the Rocket League game, the pickup truck chosen was the F-150 Warrior, the best-selling in the world that has starred in other video games.

The game is a combination of arcade style football and car wreck. In it, vehicles take off and, in the air, collide with a giant soccer ball. With this inspiration, the Ford F-150 design team developed the project in partnership with designers from manufacturer Psyonix so that the in-game pickup would preserve some of its core features. The C-shaped headlamps, wider frame on the wheel box and the F-150 emblem at the rear were kept.

Bringing the F-150 Rocket League version from virtual world to reality was done by Cinema Vehicles, which produces cars for TV and movies. They used body graphics, 37-inch tires, side vents, a wider gauge than the F-150 Raptor, and orange-lit rocket turbines in the bucket. The body is short and wide, and customizations include a stylish front grille, which features the massive Ford name and details in a variety of colors.

“The real F-150 has all four wheels on the ground. In the game, the vehicles fly through the air and are basically hit by a giant soccer ball. So it needed to look like that,” says Adam Ricobelli, a Ford designer. She can do it. An exercise in imagination that went beyond the boundaries of the screen.