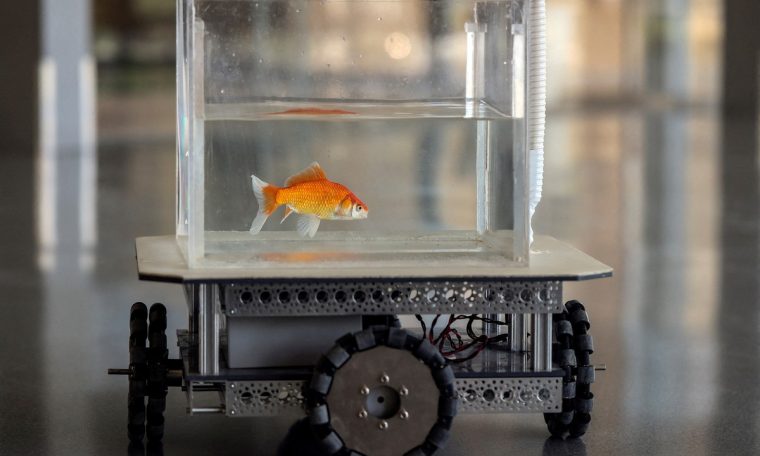 Goldfish are able to drive wheeled vehicles on dry land, a team of Israeli researchers has concluded A study of the ability of species to adapt and orient themselves in a terrestrial environment,

Researchers from Ben-Gurion University located in the Negev desert created a device that allows goldfish to walk on land floating in an aquarium mounted on top of a robotic cart,

The study was published in the journal “Behavioral Brain Research.”

The researchers attached cameras that track the movement of the fish and connected them to a computer that guides the vehicle. (see picture below),

When the fish went in front of the aquarium, the vehicle moved forward; While the fish was behind, the vehicle remained motionless, say the researchers, who published a video of a “vehicle controlled by fish”.

Israeli scientists set a goal to complete the study. When the fish managed to guide the vehicle to the target, it received 0.002 grams of food grains in its aquarium as a reward.,

After a few days, the fish managed to reach the target without getting lost, according to the study, “regardless of their starting point” and “avoiding dead-end roads.”

research concludes that Goldfish have “the ability to transfer their spatial representation and navigation abilities to a terrestrial environment completely different from their own”.,

The study was publicly funded, and its authors say it follows the Israeli protocol of respecting animals.

See also  Brexit: No extension is no surprise, states Foster