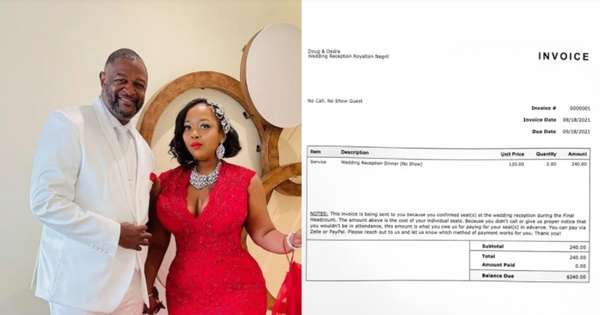 Have you ever had a party and thought about sending bills to friends who say they will go and won’t come that time? That’s what Doug Simmons and Daedra McGee, residents of Chicago, USA, decided to do. Considering the many absentees at the wedding ceremony, he sent an invoice for US$240 (equivalent to R$1,250) to each guest who did not attend the event.

He posted the letter sent to his missing friends on social media, “This challan is being sent because you confirmed the seats at my wedding reception. Since you did not call or inform us that you will not be present, we owe you to pay for your seats,” the New York Post was told.

The ceremony was designed to receive about 100 people at a resort in Jamaica, and so the couple decided to confirm whether each guest would attend the event. According to the couple, they sometimes asked guests if they would attend, and they always heard positive answers.

“Nobody said anything to me or texted me saying hey, we can’t go. That’s all I was asking for. If you told me you couldn’t go, I would understand, but don’t go without saying anything and still pay me for you and yours, ”said the fiancé. Despite this, the lovebirds do not intend to take charge from anyone, but they were upset by the absence on the long-awaited date.