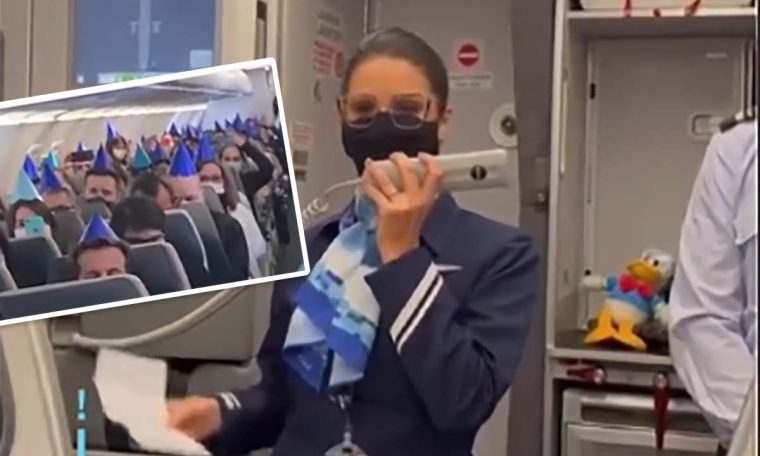 On June 9, Azul Linhas Aéreas took a different action on one of its planes, notably one that features a memorial painting of Donald Duck, in a sign of the partnership the airline has with Disney. On the occasion of the famous character’s 88th birthday, the company organized a celebration on flight AD-4769 between Guarulhos and Cuiaba.

Passengers were invited to participate in the festival, which included a speech Specially prepared for flight attendants, remind all passengers of the special date as well as a plush “Happy Birthday” in the presence of Donald Duck.

What happened on board, as well as the crew member’s speech, was recorded by the airline and published on its Instagram account, as shown in the video below (wait for loading).

“Today we are going to celebrate in the clouds. We are delighted to celebrate the birthday of our dear Donald Duck in this flight… Everyone is invited to attend the party. Every seat has a birthday kit so that we can celebrate this magical date together. And in this flight, we will have more surprises, stay tuned”,

This date is celebrated in honor of the first appearance of this Walt Disney cartoon character created by Dick Landy in the short film “The Wise Little Hen” on June 9, 1934. Over the years, Donald Duck’s appearance has progressively changed, reflected in his beak, legs, and belly, but his blue sailor-style suit and hat have changed little, as has his irrepressible anger, bad temper and misfortune. Is.

There was always something in the drawings that would excite him and ruin his day, but he always showed a good heart. Perhaps he was Disney’s most versatile character, with countless pursuits from fisherman to hockey player, curiously always with little talent but with lots of willpower.

Donald has been the protagonist of countless short films, comics, and animated children’s films, with his unique way of jumping on one leg when he gets angry for some reason. During his “career”, he was nominated for Oscar 8 times.