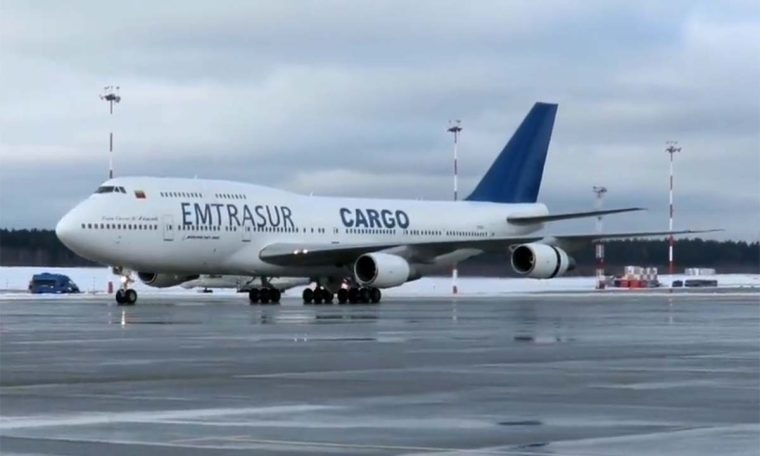 A ban on the overflight and landing of a Venezuelan Boeing 747 in Uruguay was registered and its contents were issued by the government.

The story (which is already turning into a true soap opera, judging by the number of chapters) began when a Boeing 747-300 from Venezuelan Emtrasure, a company affiliated with state-owned Convisa, flew from Mexico to the capital of Argentina with auto parts, What would have been a regular and authoritative charter became a diplomatic event and a global scandal, involving at least eight countries on two continents.

it all started a while ago

It all started when it was revealed that the Jumbo, once owned by Mahan Air Company, was also carrying Iranians. There is no technical requirement for this (The pilots were Venezuelan and thus a cargo flight was usually performed with two crew members, but 23 people on board), in addition, not all occupants were declared on the flight manifesto.

This in itself raises doubts, but matters escalated when Argentine companies refused to provide any services to Jumbo, fearing retaliation for US sanctions on Mahan Air, an airline affiliated with the Iranian Revolutionary Guard and The alleged owner of the aircraft. With no choice, the pilots decided to fly to Uruguay to refuel, but were unable to enter. Upon its return to Buenos Aires, the aircraft was temporarily confiscated and is still there.

Alerted by Paraguayans about one of the plane’s pilots, Gholamreza Ghasemi, accused of terrorism by the US and Israel, the Uruguayan government decided to ban the entry of the Boeing 747 when it was already in Foz do Río da was flying over Prata. Coming to the country

The neighbors’ warnings were taken more seriously when the crew asked permission not to stay on the ground for just 3 hours to refuel, but yes 24 hoursHave already rested in Buenos Aires.

When contacting Montevideo Control, the controller talks to Jumbo in English that “There is apparently a problem with your permission to enter Uruguay airspace, we are going to ask you to circumnavigate (turn) at the Dorbo point (a so-called “fixed” geographic location, used in aerial navigation). are”,

The instructions are understood and followed by the Emtrasur crew. Soon after, the controller returns and explains in Spanish “I got information that they can’t enter, just a few minutes ago, I’m coordinating and already confirming, continue to orbit in Dorbo and I’ll get back to you”,

Then the controller calls Jumbo once again and notifies that “Uruguayan Air Defense Command does not authorize your entry into Uruguay airspace, confirm whether you will return to Eziza or what your intentions are”.

Jumbo pilots then say they will come back and ask if “Will you coordinate with Eziza for our return?” and the controller responds “Yes, right, we are in communication with them (Argentina), but now let’s go to Rio de la Plata”, Finally, the crew of the 747-300 requests weather conditions from Eziza Airport in Buenos Aires, which is passed by Uruguayans before transferring communications to Argentina, listen,

The audio was released by the Government of Uruguay, and confirms that the country blocked entry following complaints of links to terrorism by both the aircraft and the crew.