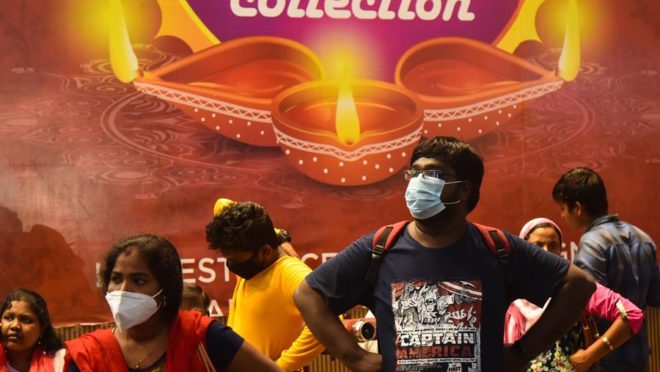 People arrive to shop on busy Ranganathan Street ahead of Diwali, the Hindu festival of lights, in front of an advertisement, Chennai, India, October 30, 2021. Diwali, the Hindu festival of lights, marks the victory of good over evil and is celebrated in the memory of Lord Rama. After completing 14 years of exile, returned to his kingdom Ayodhya. Diwali is celebrated by Hindus all over the world on 4th November., Photo: EFE / EPA / IDREES MOHAMMED

In May, India was in trouble: more than 4,000 deaths per day and more than 390,000 new confirmed cases of Covid-19 per day. The health system collapsed. It is estimated that, overall, 4.6 million people died in the country as a result of the pandemic. The delta version was called the “Indian version” until the WHO successfully changed its name. The country turned the tables dramatically in the weeks that followed. The confirmed case curve has fallen so sharply that it has returned to pre-delta levels in just two weeks.

How did India get this? Prime Minister Narendra Modi, who disappeared from public view in May, is now all smiles and celebrates getting a billion people vaccinated. But vaccines cannot explain this phenomenon: most of the decline in cases occurred when the Indian population had not reached 10% of those who were vaccinated. Now, only a quarter of the population has had two doses, although more than half have received at least one dose. magazine economist proposals His conclusion: It is not that India fought the pandemic. “Instead, the simple fact is that Covid-19 fought India.”

More than 90% of Indians in New Delhi have antibodies against COVID-19. This is above the estimated number for achieving herd immunity. Indians are first protected by natural immunity. India’s case is being repeated in Indonesia, Pakistan and Bangladesh. These countries together comprise more than a quarter of humanity’s population.

It is healthy to understand that natural immunity, if better than the immunity provided by vaccines (a distinction made by the US Centers for Disease Control), does not do so because it is “natural”. We should not fall under the illusion that something is as good as it is natural: nature has an abundance of counterexamples.

In a study on natural immunity, compared to mRNA vaccines, the thing that attracted the most attention was pre press of Israeli Sivan Gazit and colleagues, who used samples from 46,000 patients during the Delta variant outbreak. They found that those who are naturally immune are eight to 21 times more resistant to the delta variant than those who are vaccinated.

Natural immunity lasts longer and provides more protection than vaccines, but the authors think that a dozen vaccines may provide increased protection for natural immunity, although they could not conclude this with their sample. Study remains without formal review, but we have informal one: Andrew Gelman, Columbia University, statistics professor it is called Joe sees “no statistical reason to question the claims” of the study, but laments that only 5% of those involved were over 60, one of the most vulnerable groups to the disease.

Both the natural immunity and the one provided by vaccines diminish over time. A Qatar study Lath J. Abu-Raddad e Kolegas, followed 43,000 people who had COVID-19 and found that the protection against reinfection was 95% after seven months of illness. Scientists expect this protection to last even longer. Other studies extend the duration of higher protection to ten months.

Medical Journal last week the Lancet published study review About natural immunity. The pattern in study after study is that the protection offered after recovery from illness is high and long-lasting, although it is too early to say how long this lasts. In the case of measles, the protection is very long, probably lifelong. In the case of the flu, this is temporary, especially because of the speed at which the virus mutates and develops.

A human illness caused by a virus similar to the pandemic was the 2002 Asian flu. One study indicated that in people who had the disease, the immune response persisted even after 17 years. In addition, natural immunity against one type of the new coronavirus appears to extend well to other types. The review is clear about the potential side effects of the mRNA vaccine, saying that “some people who have recovered from Covid-19 may not benefit from vaccination,” and cautions that one study indicates that this vaccine may be associated with greater effects. Adverse effects when administered to people with natural immunity.

It is by no means prescribing infection, however, what shows the most promising results is that mandatory vaccination is irrational and poses a potential waste of money and even health risks in people who have already had the disease. have recovered from The future of COVID-19 is that it will go from pandemic to pandemic – we will live with disease as we live with colds and flu.

See also  When and how to watch AMD's RDNA2 event in India today?

Even with much of this literature already available, the US Centers for Disease Control decided to publish an article claiming that the safety of the vaccine is superior to that of natural immunity. The sample was smaller than in the above studies. The group of patients was not common to the rest of the population, as they were already hospitalized. was obtained with the study skepticism of experts, but CNN enthusiasm.

Senator Bill Cassidy interrogates CDC Director Rochelle Valensky during a hearing in the US Senate. “If we don’t know whether natural immunity provides protection against future infections, it’s because we decided not to look. Because I’ve heard that we have a group of people who have been infected before. Why didn’t we do this research?” Not answering the question, Valensky said that “after reviewing 96 studies on this question, our current position is that everyone who has been previously infected should be vaccinated.” Valensky for Children and Adolescents There have also been supporters of mRNA vaccines.

In Switzerland, citizens who prove that they have recovered from COVID-19 in the past 12 months are considered protected by the government, with the same status as those who have been vaccinated.