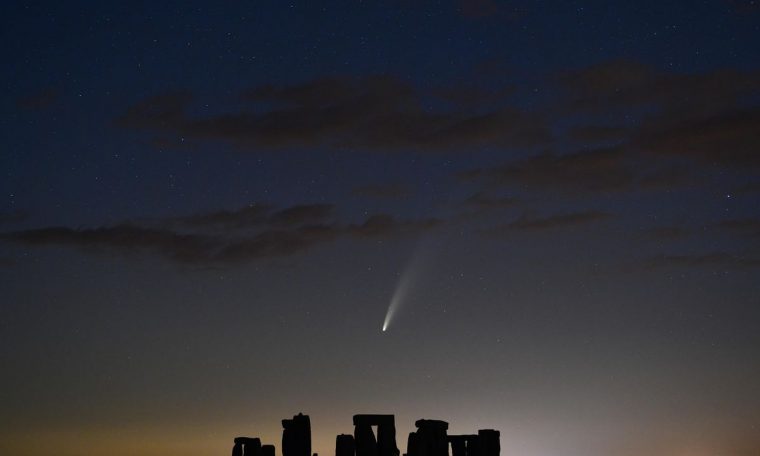 What’s got two tails, could fizzle out at any second, and won’t be seen by humans for another 6,800 years?

Comet NEOWISE is predicted to be visible for a few weeks yet, so you can take your time photographing this visitor from the outer Solar System, right?

No, no you can’t—you need to photograph it on your next clear night. Besides, it’s now visible earlier in the night, right after dark, so it’s getting easier to find and photograph.

Why? Comets are unpredictable. Comet NEOWISE—also known as Comet C/2020 F3 (NEOWISE)—is currently “outjetting” gas and dust, but that could cease at any point. Its trajectory means that it’s coming up on its closest point to the Earth just as it moves into the constellation of Ursa Major, sweeping beneath under the “Big Dipper.”

Now that’s going to be a great photo opportunity.

Comet NEOWISE is peaking, and the next few days, possibly weeks, are the best and the last chance to see it and photograph it.

So here’s everything you need to know about how to photograph Comet NEOWISE, the most spectacular comet to grace the northern hemisphere’s night skies for decades.

MORE FROM FORBESNow A Naked-Eye Comet After Dark, Few Saw Comet NEOWISE Coming. Here’s How You Can See It GoingBy Jamie Carter

When to photograph Comet NEOWISE

Comet NEOWISE is getting higher above the horizon as seen fro the northern hemisphere, so it’s becoming easier to capture above buildings, mountains and trees.

Tonight—Saturday, July 18—Comet NEOWISE will be visible close to Talitha, one of three pairs of stars that make up the feet of Ursa Major, the Great Bear. On Thursday, July 23 the comet will be at its closest to Earth (at 64 million miles), but since it’s receding from the Sun it’s probably on the verge of dimming slightly.

So get out and photograph it as soon as you can!

How to find Comet NEOWISE

Comet NEOWISE is a naked-eye object, but only just. Follow the charts provided and you’ll be looking in the right part of the night sky, but how do you actually find the exact location of comet to photograph it? The best way is to use you a pair of binoculars (I always use 10×50, but any pair will do). They will let you get an instant close-up of anything you think may be the comet. It’s got an obvious tail.

Comet NEOWISE doesn’t move, at least, not perceptibly so (only from night-to-night you will notice its position changing). From the point of view of the observer on any one night, it’s the night sky that moves, taking the comet with it.

As seen from northerly latitudes (Canada, the UK, northern Europe) above 42ºN it appears to hang in the sky all night and is currently visible from dusk through dawn. “Look in the northeast after sunset and northwest before sunrise—on a clear night in the UK you can see it all night,” said astrophotographer Ollie Taylor, who’s been tweeting some fine images of comet NEOWISE. “That’s what you need to know to line-up your landscape shots, but latitude has a big impact.”

However, Comet NEOWISE is very small—if you stretch out your arm you can cover it with your little finger. Just as you can do with the Moon.

So exactly how big a lens do you need? Actually you don’t need a big lens at all.

What photography equipment do I need to photograph Comet NEOWISE?

A camera that has manual settings (so you can control aperture, ISO, shutter speed and focus) and interchangeable lenses is by far the best option, such as a DSLR or mirrorless camera. You’ll then need a wide-angle lens for an astro-landscape shot that features Comet NEOWISE behind an interesting foreground and/or a zoom lens to capture it closer-up for a more technical astrophotography image (you might then even get its double tail).

“I’ve been using a mixture of lenses as well as my small Celestron Telescope,” says David Blanchflower, an amateur astrophysicist and astrophotographer from Newcastle Upon Tyne in England, who has been publishing some impressive images of Comet NEOWISE.

How to get a good focus and sharpness on Comet NEOWISE

Whatever photography equipment you use (and more on that below), always prioritise images that are both well focused and tack-sharp.

“The crucial thing in all this is getting a good focus,” said Blanchflower, who said that focus makes a significant difference when the comet comes into view. “I’ve been using Capella to get the best focus possible.” Focusing on a star is one way of doing it. Capella, the brightest star in the constellation of Auriga, is the closest really bright star to Comet NEOWISE. You’ll find it to the comet’s right-hand side, due east. Using live view on your camera, pan across to Capella, get it tightly focused, then pan back to the comet. Another technique is to use an artificial light.“Focus on a light source about 30-40m away, using live view—possibly even with auto-focus—to get your focus nice and tight,” said Taylor. That could be a streetlight, a light on in a house some distance away. The third way is to use autofocus while it’s still light (so, a few hours before the shoot) to accurately focus your camera on something in the distance, then switch-off autofocus. “If you’ve no other option you could fix the lens to infinity focus,” adds Taylor. For that, look for the ∞ symbol on the dial.

This is all about star-trailing. Whether the stars will trail in your photo, and for how, long, depends on the 500 rule; 500 divided by the focal length of the lens equals your exposure time to keep stars sharp. “You need to keep your stars sharp so you need to master the 500 rule, but not all DSLRs work with that rule, so experiment.”

Experimenting with camera settings is what capturing Comet NEOWISE is all about.

How to photograph Comet NEOWISE with a wide-angle lens

Although the comet is pretty small, you don’t need to get a close-up. After all, astro-landscape photos featuring a beautiful natural backdrop are often much more attractive to the eye than a technical close-up shot.

“Shoot with a fast, prime lens if you can—this will work best as a wide aperture allows you to capture more light and a more detailed image,” said Wales-based astrophotographer Mathew Browne. “A 50mm prime lens tends to be an inexpensive option that provides a pleasing focal length to capture the comet with exposure times of up to 10 seconds.”

Always think about composition—get something nice in the foreground; get the comet above a building, in between two mountains, or whatever works in your landscape.

How to photograph Comet NEOWISE with a zoom lens

If you do have access to various lenses, you might be able to get a close-up of the comet’s tail. “For close ups at 300mm, shorter exposures like 3.2 seconds at ISO 1600 will give excellent detailed pictures,” said Blanchflower. “I’ve been taking some comet landscape pictures using 75mm too using exposure times up to about 6 seconds with ISO from 800-3200, but it depends on local conditions.”

It really does. Your lens, your camera, the light conditions, the brightness of the comet—all these variable means you really should expect to experiment, and not stick to prescribed settings.

As a rule of thumb, use a higher ISO and shorter exposure time the more you zoom.

Be prepared to experiment!

“Settings at dusk will be different from at night, and you could also consider both tracking, and stacking to reduce noise,” said Taylor. “You could also take a longer exposure for the foreground and merge the various images.”

How to photograph Comet NEOWISE with a smartphone

It’s tricky. “You’re not going to get a usable image—my advice is to try and borrow a proper camera,” said Taylor. “But if you’ve no choice, always use a tripod and an app that lets you control the ISO and the shutter speed—give yourself 20-30 seconds exposure and ramp-up the ISO, and don’t worry about star-trails.”

“Focusing is the main issue, since this cannot easily be manually controlled,” said Browne. “Presuming the smartphone photographer has a tripod, they’ll want a “low light” mode and try to focus on the brightest point of light, which is likely to be the star Capella.”

We’re still talking about producing a very basic image where the comet is just about detectable, though if you have one of the new flagship phones such as the Huawei P40 Pro or the iPhone 11 Pro, try their clever “Night Modes”, which take five or so images and automatically stack them.

Worth a try … but don’t get your hopes up.

How to get an extra-special shot of Comet NEOWISE

That depends on your own taste, and on luck, but mostly it’s about composition and patience. For example, there have been several photos of Comet NEOWISE framed by mountains, with aurora borealis in the foreground, while others have featured noctilucent clouds, the comet reflected in a lake, or something even more creative like the comet being “caught” by a foreground figure and an arresting inverted view.

They’ve all been done now, so think of something that hasn’t been done.

“If you want an astro-landscape shot rather than a astrophotography shot, you need to think outside the box,” said Taylor. There’s no point hanging about Stonehenge trying to get a shot that’s already been taken and flashed across the globe.

So get out there with your camera and capture the “comet of the decade” while you can, and enjoy your time with this special celestial visitor. It will be gone soon.