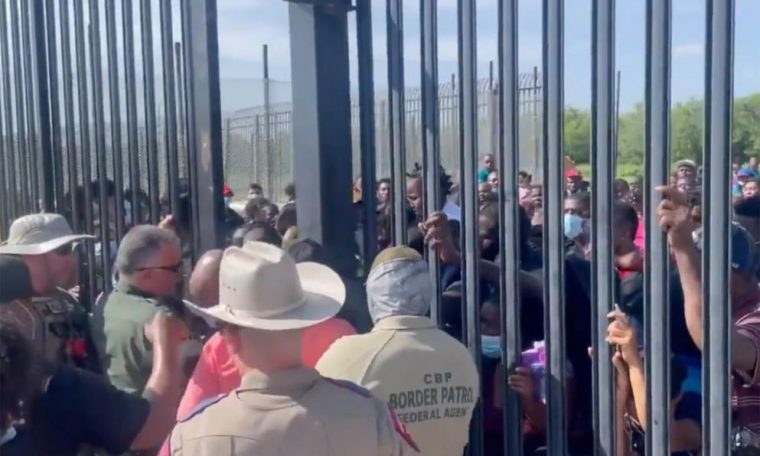 Hundreds of immigrants from the Mexican side walked into a border gate in Del Rio, Texas…

Hundreds of immigrants from the Mexican side walked into a border gate in Del Rio, Texas on Monday, the 19th, and tried to enter the United States as agents from the Customs and Border Protection Department and local police clashed. Put the group down.

The violent confrontation began when US officials, including state troops, began to enter through the gates and into the US for selected migrant families. But soon, single adults and other unwelcome people with families tried to make their way through the gate, making it difficult for US officials to lock the huge door behind each family.

At least eight federal agents and police were holding the gates to prevent hundreds of people from opening the way. According to a video posted on Twitter, most of the immigrants who tried to pass through the gate were men.

A spokesman for the CBP for the Del Rio region said the incident was brief and the rest of the meeting was peaceful, although some people tried to cross the fence. “Border patrols in the Del Rio sector, in coordination with law enforcement partners, found more than 300 undocumented migrants. They began as small groups and were coming together to surrender to police officers in the area. This included youth without partners, adults, family units and pregnant women from various countries including Cuba, Venezuela and Haiti,” CBP said.

The agents chose to allow the families to go through the gate one by one, but as soon as the gate was opened, the others in the back thought the whole group had been admitted and began to push whoever was in front. . This prompted US officials to quickly push the immigrants back and close the gate.

According to a CBP spokesman, some immigrants who helped bring the situation under control were not their turn. After the families, children and adults passed separately, they were taken to federal immigration facilities to be processed.

While the incident has been kept under control, the confrontation is the latest troubling incident for the Biden administration, which has been hesitant to call the dramatic increase in immigrants at the border a crisis.

BENCKE CONSTRUTORA- Make the best investment for you in Itapema, Santa Catarina. Building dreams since 2004. Direct financing with the construction company. www.benckeconstrutora.com. For more information call: (617) 440-8471.