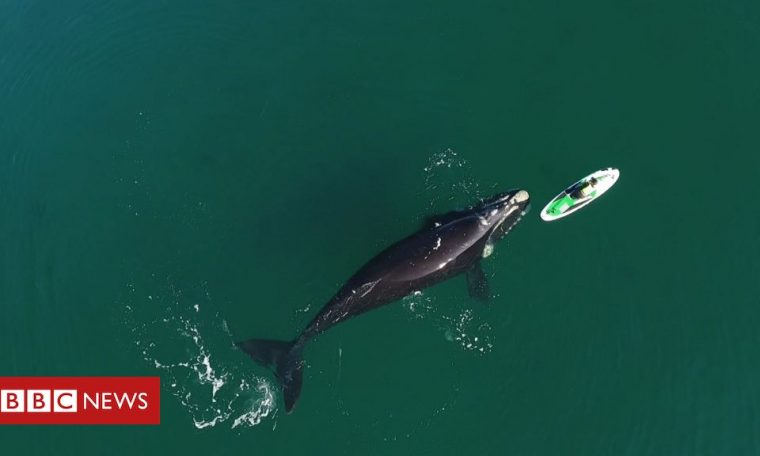 Annalia Giorgetti was rowing her board in southern Argentina when she registered in an encounter she describes as “a magical moment”.

Every year, groups of southern right whales migrate to the Valdés Peninsula to mate.

On one of these trips, Giorgetti was touched by him in the middle of the ocean.

“They were submerged, they approached eagerly,” Giorgetti tells the BBC.

“And one of them touched me. I said to my friend, ‘The whale touched me.’ Then we saw a drone filming everything.”

The device belonged to the 43-year-old photographer Maximiliano Jonas, who also lives in the south of the country in the city of Puerto Madryn.

“The sea that day looked like a mirror, the tide was high and there were as many as 50 whales around the shore,” he tells BBC Mundo.

So he took his drone and went to film the whales from above.

“I know whales are sociable, but I’ve never seen this kind of interaction before,” says the photographer. His pictures went viral on social media.

The swimmer says that the whale started approaching and gently tapped the board with one of its fins.

“When she approached, I put the paddle on top of my board and stood still to see how close she would get,” Giorgetti explains.

See also  After the historic snowfall, Spain is preparing for an extraordinary cold wave. world

“I assumed she was playing like a dog looking to play with you. But in this case, it’s a huge animal,” Jonas wrote in his net. “I saw the gesture, saw it in slow motion. I couldn’t believe it.”

“When the whale touches it, it turns around and observes the reaction of the person it touched,” he describes.

“I was looking and I said: It’s communication. Tears welled up in my eyes. I kept looking and thinking about the person down there. How jealous, in this person’s experience, is,” he says.

“I put pictures of that moment on my social network and (Georgety’s) daughter texted me on Instagram and said: ‘This is my mother. She’s celebrating her birthday,'” says the photographer.

“It was a wonderful birthday gift,” says Giorgetti.