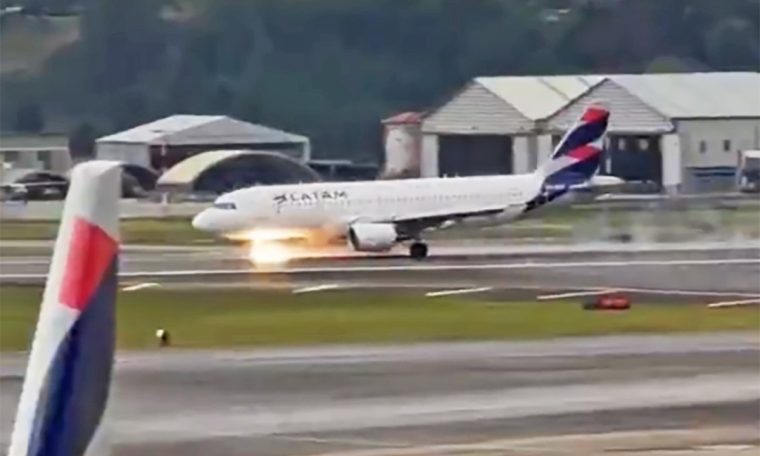 A LATAM flight panic erupted after one of the company’s Airbus jets took off, had to return in an emergency and land with a bad landing gear.

This case is about a LATAM Colombia plane going from Medellin to Cartagena. Shortly after takeoff, pilots identified a failure in the aircraft’s front landing gear, according to Civil Aeronautics, the body that oversees Colombian aviation and also investigates incidents and accidents.

With the failure detected, the pilots decided to return to José María Cordova International Airport and make diversions (orbits) to burn fuel to stay below the maximum landing weight.

When the plane landed on the runway, the front tire burst and, along with the friction of the wheel metal with the asphalt, a large amount of spark was released as the jet slowed down the runway:

Today at 15:12 in Colombia, an A320 aircraft from #latam CC-BAS registration covering the Medellin–Cartagena route, emergency return to José María Cordova de Rionegro Airport in Antioquia, which appears to be a failure in the rear landing train.
1/2 pic.twitter.com/jeWSagXunV

The CC-BAS registration Airbus A320 stopped at the end of the runway and the aerodrome firefighter teams, already on standby, provided the necessary assistance.

The images released showed that only half of the two wheels of the front landing gear remained in place, preventing the aircraft from exiting the site. As a result, Medellin Airport was closed at the time of publishing this article, along with a large sequence of canceled flights.

#important information , Today, March 29 at 3:12 pm, A-320 aircraft from Company LATAM with CC registration – BAS covering the Medellin route – Cartagena, while returning to the airport @AeropuertoMDE and make an emergency landing. pic.twitter.com/oXte4HlVrg