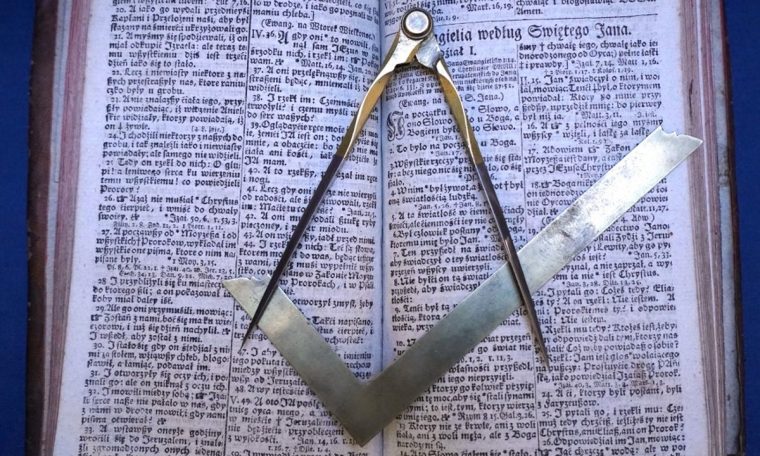 Gorgeous collection of Masonic objects in Poznan, in Poland, preserves its treasures with its sections and compasses, engravings, books and old albums, some bearing the seal of the sinister Heinrich Himmler, considered number two of the Third Reich.

With over a kilometer of shelves, about 80,000 volumes are stored, many of them quite old, and others more recently, preserved in the library of the UAM University of Pozna in western Poland.

“The collection is one of the largest Masonic catalogs in Europe, or even the most important according to some,” the collection’s manager, Iuliana Grazynska, told AFP.

“And it still retains some mysteries,” insisted Grazinska, who has just begun recording 89 cardboard boxes with files collected by Himmler’s services and which were never classified.

The book was confiscated by the Nazis — Photo: Janeck Skrzynski / AFP

“The Nazis hated Freemasonry,” Andrzej Karpowicz, who was responsible for the Pozna collection for 30 years, explained to AFP.

Karpowicz recalls that Nazism was “the fruit of an anti-elitist and anti-intellectual wave”, and so, essentially, they were “anti-masons”.

During the Third Reich, the Nazis closed or disbanded Masonic lodges, and confiscated or burned their library collections.

The files are part of material confiscated by the Nazis – Photo: Janeck Skrzynski / AFP

As the German army advanced, the collections of the conquered countries enriched the Reichsführer-SS Heinrich Himmler, which, according to Karpowicz, also included archives relating to Jews, Jesuits, and witches.

Moved to safer locations than Allied bombings, the collection was divided into three main parts, two of them hidden in Poland, and the third in the Czech Republic.

Part of the treasure confiscated by the Nazis – Photo: Janeck Skrzynski / AFP

The Pozna Library formed its Masonic collection in 1959 in the middle of the communist period, even when the Freemason movement was restricted in the country. PolandHowever, there was an older Masonic tradition, and its first lodge was founded in 1721.

Among the most important Freemasons in the country are the last king, Stanislaus Augusto Poniatowski, the first president Gabriel Narutowicz, and the famous pianist Ignacy Paderevsky.

Much of the library is composed of works from the 19th and early 20th centuries, mainly in German, among them all Masonic encyclopedias of that language, drawings, carvings, food menus, and almost complete records of members of the lodge and workshops. , in a period that extends to 1919.

According to Grazinska, the collection also includes an “original and very rare edition” of the first Masonic constitution, written by James Anderson and published in 1723. He added, “It is the pride of our collection.”

The collection is open to anyone who wants to study or delve into it. “It’s a mine of information that you can delve into freely,” Karpowicz says.

See also  The day she turns off the device, the elderly woman will wake up from a coma