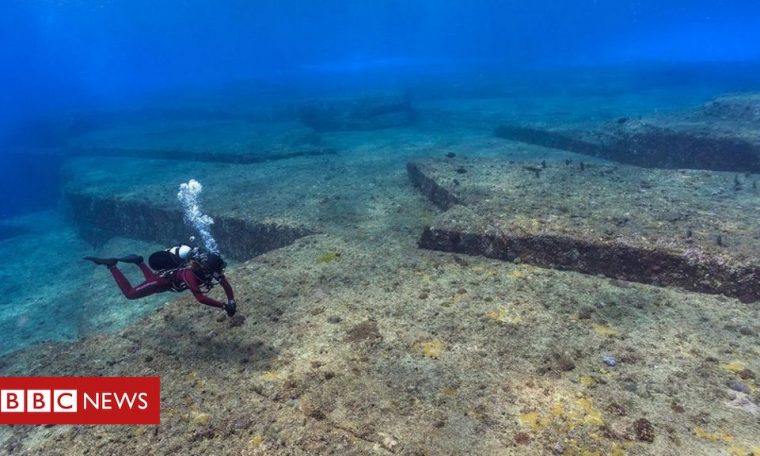 In 1987, a diver exploring the coast of Ryuku Island in southern Japan made an astonishing discovery.

25 meters below the surface, he saw a series of carved stairs almost entirely.

“Do you know that goosebumps sensation? My hair stood on end, it was overwhelming,” recalls Kihachiro Aratek, who was looking for a diving spot when he came to the structure near Yonaguni Island, part of the archipelago. is.

Today known as the Yonaguni Monument, this massive structure 50 meters long and 20 meters wide, reminiscent of a rectangular pyramid, is one of the most interesting underwater structures in the world.

“I was very impressed when I found it,” he says. “I knew it would become a treasure on the island of Yonaguni.”

After Aratech discovered the structure, a group of scientists led by geologist Masaki Kimura of Ryuku University in Japan began researching the construction of the mysterious submerged rock.

It is believed that it is more than 10,000 years old. But its origins divide opinion.

“I think it’s very difficult to explain its origins as being purely natural, because there is vast evidence of man’s influence on structures,” says Kimura.

Along these lines, there are those who believe that the structure is a remnant of a long-lost civilization in the Pacific, possibly built by the prehistoric Jomon people of Japan, who lived in these islands in about 12,000 BCE.

It is nothing that it was nicknamed “Atlantis of Japan”.

“Do I believe it’s a man-made spiral staircase,” Aratech explains.

Despite the narrow passageway, arched entrance and apparently parallel 90-degree angles, most geologists say the Yonaguni Monument is probably an unusual natural structure – especially since the structure is associated with a large rock mass.

“When I first saw it, I immediately realized that the structures were similar to the ones on the ground,” says Takayuki Ogata, a geologist at Ryukyu University.

“I had never seen a continuous build up from the ground to the ocean floor, a reason I was really impressed.”

Well-defined layers of the structure are believed to have formed gradually, as the monument is located in an area prone to earthquakes.

Geologist Makoto Otsubo of Ryuku University also recalls that symmetrical shapes and structures can also be found in nature.

“This can be explained by looking at other naturally constructed landscapes that are similar to this,” he explains.

This is the case of the Giant’s Causeway in Northern Ireland, whose thousands of interconnected basalt columns were formed from a volcanic eruption millions of years ago.

Whatever the origin, the discovery of the Yonaguni monument attracted spectators, such as professional diver Kenzo Watanabe, who tried to plan a trip to the island without wasting time.

“If it was turned into an archaeological site, there were rumors that we would no longer be able to dive there, so I decided to go while it was still possible.”

“After seeing (the monument), I feel that there is no way that could not have been made by humans, especially with all those flat surfaces. It’s really impressive, many different surfaces and symmetrical shapes. I Definitely think it’s not natural. “

While the story of the monument’s mythological origins may not be true, it will likely continue to fascinate those who are lucky enough to dive there – and take a closer look at this unique geological event.