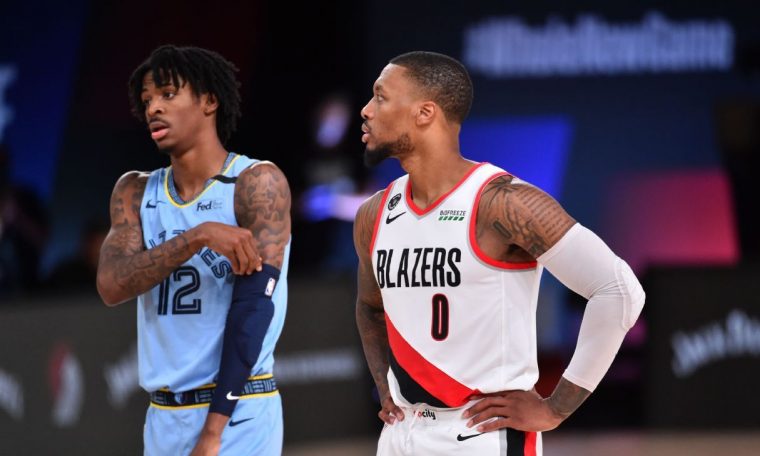 The race for the Western Conference play-in is nearing its thrilling conclusion. Now, all eyes are on the Portland Trail Blazers.

The Memphis Grizzlies punched their ticket to the play-in with a big win over a Milwaukee Bucks team playing without Giannis Antetokounmpo, while the Phoenix Suns stayed perfect in the bubble with a 26-point victory over the Dallas Mavericks.

Meanwhile, the early wins by Memphis and Phoenix ended the San Antonio Spurs’ 22-season playoff streak, which is tied for the longest in NBA history.

Here’s the latest on the standings, the games to watch Thursday and Friday, and everything you need to know. Check back for highlights and updates throughout the day.

Booker leaves MKG in the dust

The Suns stayed perfect in the bubble as they fight for a spot in the West play-in. Buckets like this sure helped.

Book had him on the first step 😲

The Grindfather and Z-Bo are in the building

“Grit ‘n’ Grind” legends Tony Allen and Zach Randolph were spotted in the virtual crowd during the Grizzlies’ final seeding game. A win clinches them a spot in the West play-in.

What were LeBron and AD laughing at?

The world may never know.

LeBron’s historic streak will continue into 2020-21

LeBron James scored 17 points in 15 minutes in Thursday’s seeding round finale for the Los Angeles Lakers. Head coach Frank Vogel said he wanted to play James in the first half to “get him some work, some rhythm” with the Sacramento Kings game being the last chance for a tuneup before L.A.’s playoff opener, likely coming Tuesday.

While it wasn’t the smoothest performance for the 17-year veteran — he missed a couple of point-blank attempts at the rim in the second quarter he’d surely like to have back — he did secure a couple statistical achievements worth noting. His streak of scoring 10 points or more extended to 995 games — he’ll officially take the streak, which began on Jan. 6, 2007, into next season with a chance to push it to 1,000 in the first couple weeks of 2020-21.

And while his four assists on the day dipped his season average to 10.2 assists per game, he still led the league, earning him his first assists title of his career.

LeBron James misses a couple wide-open layups in the second quarter in the Lakers last game of the season.

The Wizards leave the bubble with a W

LAKE BUENA VISTA, Fla. — The Washington Wizards became the first team to leave the NBA campus Thursday — and did so on a high note.

After losing each of their first seven seeding games here inside the league’s bubble at the Walt Disney World Resort, the Wizards beat the Celtics 96-90 before immediately flying back to Washington. By the end of the day Thursday, at least two other teams — the Sacramento Kings and New Orleans Pelicans — will have joined them, and two others from among the four fighting for a spot in the play-in tournament — the Portland Trail Blazers, Memphis Grizzlies, Phoenix Suns and San Antonio Spurs — will see their seasons end, too.

For the Wizards, a win is a win — regardless of whether it came against a Celtics team that was resting its top six players in preparation for facing the Philadelphia 76ers in the first round of the playoffs next week.

“Well, I think we had a great experience here,” Wizards coach Scott Brooks said. “We had a lot of good growth, a lot of good bonding experience, a lot of positives came out of it … We grew up a little bit these last two months together.

“I’m happy with it, and we’re all excited about the next phase of our development, and right now we are going to go home and connect with our families and go from there.”

An MRI Wednesday revealed a strained quad muscle for the Rockets’ All-Star guard, who’s now expected to miss at least the start of the team’s playoff series next week. How will the Rockets replace Westbrook and how much will they miss his presence?

What will Damian Lillard do next? 51 points? 61 points? More? Who knows. Lillard is averaging a bubble-best 37 points while also putting up an average of 9.3 assists in 41.4 minutes. CJ McCollum is the only other player in Florida averaging 40 minutes per game as Portland has leaned on its one-two combo to keep the Blazers in playoff contention. Brooklyn is locked in as the No. 7 seed and Jacque Vaughn — coaching for a chance to continue on as the Nets’ head coach next season — has his team 5-2 overall with three straight wins. — Lopez

The Suns improved to a 7-0 record since the NBA restart thanks in part to the play of Devin Booker.

For both of these teams, the goal will be to get into the playoffs healthy. Denver, which has dealt with injuries throughout the bubble, will likely be exceedingly cautious in this game as it waits on the return of wings Gary Harris and Will Barton.

Book had him on the first step 😲

The same should go for the defending champions, who sat rotation players OG Anunoby and Serge Ibaka on Wednesday and have been judicious with minutes over the past few days. Head coach Nick Nurse will likely give most of the Raptors’ regulars the day off. — Tim Bontemps

These two teams met on Monday, and the Heat cruised to a comfortable win. With this now set as a first-round playoff series, expect both teams to rest their key players in preparation for their showdown starting early next week. — Bontemps

While Chris Paul will be going up against his old team, it’s hard to see him playing much. Same goes for Paul George and Kawhi Leonard. What all of that will mean is Reggie Jackson will get a revenge game against his old team — which likely means big numbers from him (if anyone is actually playing DFS on the final day of seeding games). — Bontemps

The focus for these two teams won’t be what happens on the court, but instead what the health of two of their biggest stars is off of it. Joel Embiid left Wednesday’s game against Toronto because of a wrist injury, while Russell Westbrook sat out Houston’s loss to Indiana because of a strained quad. — Bontemps

NBA Power Rankings: A shake-up in the top 5 as playoff matchups take shape

The playoff picture is beginning to take shape as the final week of seeding games continues.

West play-in predictions: Suns perfect, Lillard spectacular, but who gets in?

Phoenix is 7-0, and Portland keeps winning. Here are the latest projections for the four-team race.