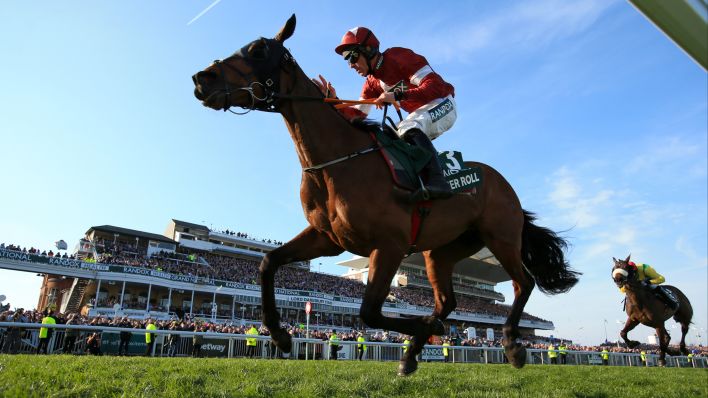 Fans of sporting history have been denied the chance of seeing it made in the world’s most famous steeplechase, the Grand National, this year after the owners of two-time race winner Tiger Roll scratched him from running.

Gigginstown House Stud, who have won the valuable handicap run at Aintree near Liverpool in the UK three times since 2016, made good on their threat to withdraw him due to what they felt was an unfair assessment of his form.

Tiger Roll scrambled home to win by a head in 2018, but ran out the clear victor in the following year becoming the first horse since Red Rum to win consecutive Grand Nationals in the process. His owners lobbied publicly for a drop in the handicap on account of his advancing years, but the British Horseracing Authority assessor left him towards the top of the weights.

In Tiger Roll’s absence, we are guaranteed a new winner. Since the weights were released, a number of racehorses have put their Grand National credentials on the line in prep races at other tracks.

The likeable Cloth Cap follows up his Ladbrokes Trophy victory with success in the Listed bet365 Premier Chase for @tommyscu & @JonjoONeill at @KelsoRacecourse pic.twitter.com/k78EUK7nv8

Cloth Cap is the ante post favourite after a Listed victory up in Scotland following a winter break. He represents an owner in Trevor Hemmings and a trainer in Jonjo O’Neill who both know what it takes to have a Grand National winner.

As any good racing tips for tomorrow will tell you, Cloth Cap is something of a ground dependent horse. He won’t want the going at Aintree turning up soft as all his winning form has come on sounder surfaces, which thankfully for his supporters are common conditions during springtime.

Irish racehorse trainers have had a stranglehold on most of the Grand National prize money recently, with the last two editions seeing the Emerald Isle produce a 1-2-3 and the first four home. It’s no surprise to find a Willie Mullins runner prominent in the market in Burrows Saint.

After winning the 2019 Irish Grand National at Fairyhouse, coming to Aintree has been on this horse’s agenda for some time. Burrows Saint has received plenty of minding at the Mullins stable in County Carlow and run over hurdles, protecting his steeplechase rating so he gets in off a nice racing weight.

The market principals lack experience of the infamous Grand National fences. One contender who is no stranger to the unique, spruce-covered obstacles including The Chair is Kimberlite Candy.

Tom Lacey is making his way as a trainer and saddled this horse to two second place efforts in the Becher Chase, another handicap run on the Grand National course albeit at a shorter distance over the winter. As Kimberlite Candy is owned by JP McManus, a jumps horse racing fanatic, he looks sure to take his chance.

The Grand National is watched by many millions of sports fans worldwide every year. This latest edition of the four-and-a-quarter-mile marathon in which you have to jump 30 fences to win takes place on Saturday, April 10.