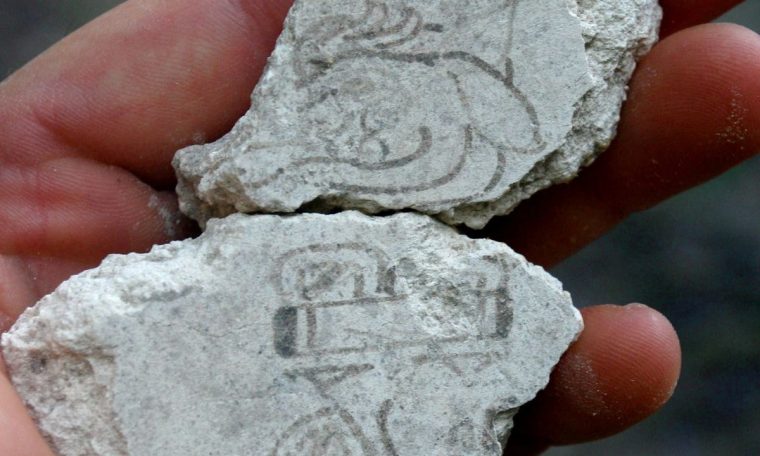 A glyph – a type of drawing or engraving – depicting a day called the “7 deer” of the Maya calendar, drawn on a fragment of a 3rd century BC mural, was found inside the ruins of a pyramid . Guatemala, This is the oldest reference to this calendar ever found, the archaeologists responsible for the discovery said on Wednesday (13).

The fragments were found at the San Bartolo archaeological site in the forests of the northern GuatemalaMade famous in 2001 by the discovery of a burial chamber, containing colorful murals dating back to 100 BC, depicting Maya ceremonial and mythological scenes.

Fragments containing the glyph “7 Vedio” were found inside the same pyramid as Las Pinturas, where the still intact frescoes were located.

As was the case with this structure, the Mayans often built temples that were initially of modest size, then increasingly larger versions on top of the previous ones. This pyramid reached about 30 meters in height.

Illustration shows what a religious construction overlaid by a pyramid in Guatemala would look like – Photo: Heather Hearst / Reuters

The glyphs found on the mural fragments for “7 deer”, one of the 260 designated days of the calendar, contained ancient Mayan writing for the number seven on the outline of the deer’s head.

David Stuart, lead author of the discovery published in the journal Science Advances, and a professor at the University of Texas described the found fragments as “two small pieces of white plaster that were once glued to a stone wall”.

“The wall was intentionally destroyed by the ancient Mayans when they were rebuilding their ceremonial spaces – and it turned into a pyramid. The two pieces fit together and have black calligraphy, which is ‘7 deer’. Opens with a date. The rest is difficult. To read,” Stuart said.

“All the images from this phase are very fragmentary, in contrast to the more famous chambers of the latter,” said the Texas researcher. By far, the oldest notation of the Maya calendar dates back to the 1st century BC.

The calendar was based on a ritual cycle of 260 days, rooted in the observation of the motion of the Sun, Moon and planets, each with its own name.

The 260-day calendar, called the Tzolkin, was one of several Maya timekeeping systems that worked together and included a 365-day solar year, a larger system called the “Large Count”, and a lunar .

The calendar was one of the achievements of a culture that also developed a writing system with 800 glyphs, the first example being from San Bartolo. The Mayans built temples, pyramids, palaces and observatories and engaged in sophisticated agriculture without using metal tools or wheels.

See also  No work, no food: pandemic nearly doubles the number of people at risk of starvation in the world