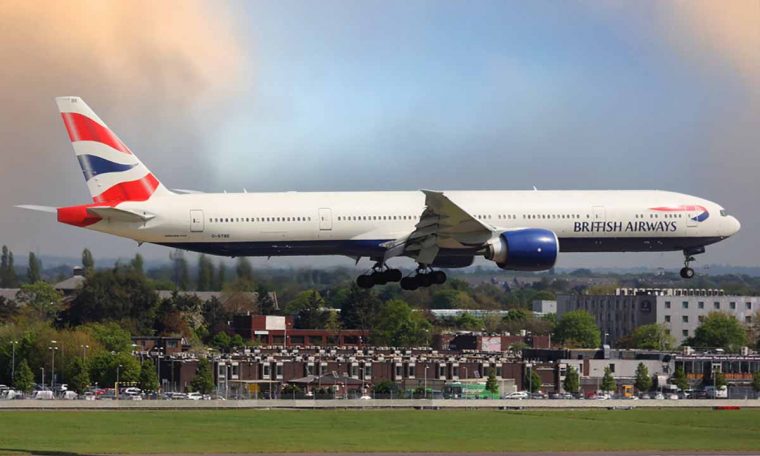 A British Airways flight faced several difficulties until it managed to land at Hong Kong’s international airport last Friday (8), after a journey of 36 hours. The case was reported during flight BA-31, a regular service that departs from London and operates with a Boeing 777-300 jet.

The pilots took off with the plane on the evening of 8 October, which should have been an 11-hour journey to Hong Kong’s Chek Lap Kok International Airport. However, as they arrived for landing, at around 14:00 local time, they had to deal with adversity brought by strong gale winds reaching the coast of China.

That afternoon, several flights, including the BA-31, were diverted, but not before British pilots made two unsuccessful landing attempts. After the aborted landing, the pilots decided to detour to the international airport in Manila, Philippines, where they landed successfully after about an hour and a half.

But the challenge still remained.

Despite being on dry land, the plane’s occupants faced another problem: Philippine border restrictions, which would require quarantine if they landed, and Hong Kong entry limits for passengers arriving from the Philippines.

As a result, none of the passengers or crew were allowed to leave the plane while they waited for the end of the tropical storm and ended up spending the night on the plane. Finally, at 9:45 am, the weather conditions in Hong Kong improved and the plane was able to take off.

The landing approach was normal until a few meters before touching the runway, when the pilots once again decided to abort the landing. Finally, on the fourth attempt, the landing was successful, resulting in the video below, which shows the pilots applauding.

Applause in HK @British Airways Fantastic Crew BA31. 36 hours, aborted landing and one night on board in Manila. Thanks to all of you. @tripperhead @Transit_Jam pic.twitter.com/fsfsgwDtDb

According to the article in the South China Morning Post (SCMP), however, the martyrdom was not over yet. After landing, all occupants still had to wait several hours at Hong Kong airport before the results of their COVID-19 research were analyzed.

Also, they had to wait a little longer to get the new quarantine facilities, as their reservations at specific hotels were canceled as there were no shows due to flight delays.

According to the SCMP, despite the trouble, the passengers did not appear annoyed by the situation, but understood what had happened. In return, British Airways issued a simple statement regarding the matter:

“Like other airlines, our flight was diverted to Manila due to Tropical Storm Lionrock, which prevented a safe landing in Hong Kong. Our customers were on board the plane. We apologize for any inconvenience caused”.