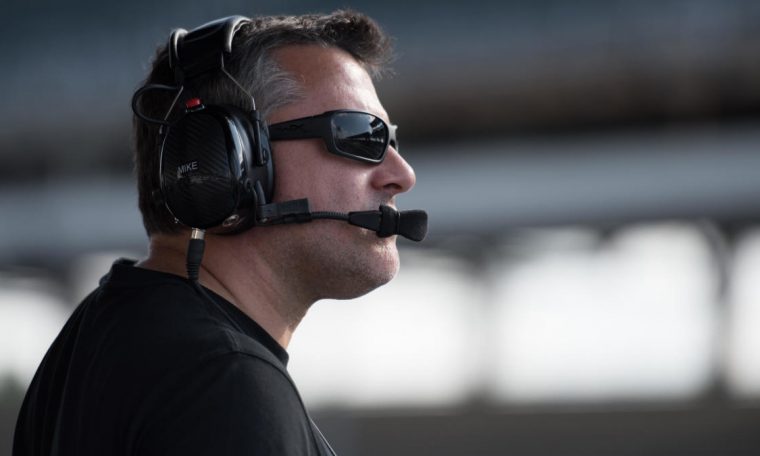 Tony Stewart has worn many different hats in the motorsports world. He’s a NASCAR Hall of Famer who has won championships both as a driver and owner. He’s run all sorts of cars from IndyCar to dirt racing and now he has the Superstar Racing Experience, which is set to take place next summer and air on CBS.

The man many call Smoke caught up with CBS Sports to discuss everything going on in the auto racing universe from Kyle Larson’s NASCAR exile to this Sunday’s Indianapolis 500.

Here are some of the highlights from the conversations, as well as audio from the full interview.

CBS Sports: Kyle Larson is not in the sport for obvious reasons and Erik Jones is also a free agent after this year. He (Jones) just got released from the 20 car after the year. In your opinion of those two drivers, which gives you the best chance to win a race?

“NASCAR has gotta get off their ass and do the right thing and give this kid an opportunity to get back in a car. I think he’s paid his penalty and he’s served the penalty long enough where you know we’ve had similar instances in the sport that have happened and the penalties didn’t last as near as long as this has lasted with Kyle.

“It’s changed Kyle’s world, it turned everything upside down and not only did it affect him. It affected his family and a lot of other people that didn’t deserve to be affected. So I think it’s been long enough. I think it’s time for NASCAR to get off their ass and to do the right thing and allow him to come back to the series now.”

CBS Sports: I do want to talk about someone that’s in your system, Chase Briscoe, extremely talented. As someone who has been watching NASCAR for a long time he kind of reminds me of you in terms of his driving style. What’s the future hold for him at Stewart-Haas Racing?

Stewart: “Well obviously we’re watching what he’s doing and I felt like at the very end of the year last year I felt like he started making big improvements. Right out of the box this year we see that carrying through the season this year. I’m very impressed with what he’s done this year so far and you know obviously we’re working him through our system. I’m proud of him, we’re going to keep developing him.

“I feel like he’ll be in a Cup car at some point for this for sure. It’s just a matter of when and where it’s gonna be. It keeps a little bit of pressure on the guys that are in those cars right now but I think that pressure is good for them. I don’t think we have any of the four drivers that just take things lightly and are complacent about anything but having that young guy in the Xfinity Series that’s doing what he’s doing keeps that heat on those guys to make sure that they’re getting the most out of everything each race.”

CBS Sports: I would imagine that Chase Briscoe, given everything with the pandemic, is probably your backup driver. If in the case he wasn’t, would you be willing to jump in the race car as a backup driver God forbid something happened?

Stewart: “I would say we would probably be more comfortable putting Chase in the car than we would me at this point. And that’s because even though they’re not the same cars they’re still relatively the same, the way they drive is the same. I haven’t been in a car for so long now it would take me a while to get back acclimated and get used to it again. So I would feel better, feeling like our best opportunity at this point would be to put Chase in the car.”

CBS Sports: What has it been like owning a team during the pandemic and racing under these conditions?

Stewart: “It’s definitely been different, and especially at the beginning when we were trying to get two shows in each week. I guess during times like this you kind of find out where your program is at and I’ve never been more proud of our employees for Stewart-Haas Racing than now to be able to crank out four great race cars each week for these four drivers to take to the racetrack with no practice and be as competitive as they’ve been. It’s really a testimony to how hard they’re working at the shop.

See also  Did 3 text on social media get MLB negotiations back on observe?

“When you can get guys like Kevin that can go out and, you know Kevin, if that care is in the ballpark at all, he’s going to get it the rest of the way there but you’ve gotta get it in the ballpark and for those guys to do that at the shop I think it’s just been incredible.”

CBS Sports: Another driver who has really proved himself is Chase Elliott, who became the first driver since you to win three straight road course races. If you got you at your prime versus Chase Elliott right now, who would win you or Chase?

Stewart: “Well I would have won of course, come on let’s be realistic. I love that kid. I’ve known him since he was a really really small kid and to see what he’s matured into I’m really proud of him… You know it’s hard to say, I think it’s different for every generation. I remember thinking back of, well, if I could have raced Richard Petty in his prime, who would have been better? It’s hard to say.”

Stewart: “I don’t know how much it would have changed it. It’s not like we ran second to all those championships that Jimmie won but the thing about Jimmie Johnson is he’s a guy that’s so consistent and I’ll be honest, as a race fan watching the race on Sunday. Watching Jimmie run up front towards the end was something that I was excited about. I know the passion that he has. Probably the worst thing about this whole pandemic is that the entire world, motorsports fans aren’t able to give him the proper sendoff that he deserves.”

CBS Sports: You talk about winning and the first name that comes to mind is Helio Castroneves, who you added to the SRX Racing lineup, that’s taking place next summer on CBS. How excited are you for the lineup that you currently have?

Stewart: “When we started this we wanted to pick guys that, I guess for me it was kind of like a dream list of guys that who would I really ultimately love to race with. So far everybody that we’ve sent invitations to has accepted.

CBS Sports: It’s really not going to be normal this weekend when we have the Indy 500. There’s gonna be no fans in attendance but I understand that you and Advanced Auto Parts are helping to bring in fans personally. Can you tell me a little bit about that?

Stewart: “I think Advanced Auto Parts has done something really unique and something cool that even though the fans can’t be there, they’re bringing the fans back to the race and making them a part of probably one of the most crucial parts of the event itself and that’s the command to start your engines.

“The power that fires up all 33 cars to start the race at the beginning of the day is, from the adrenaline standpoint, is probably one of the peaks of the day is getting that race started. So to help celebrate and to help do a promotion where fans can do their rendition of ladies and gentleman start your engines. It’s going to be something pretty cool to be able to send that video to CallingAllDieHards.com and submitting that and having the opportunity to physically be able to have their video give the command to those drivers to start their engines. And if they don’t win and get a chance to do that, 50 of them are going to get $200 gift cards.”