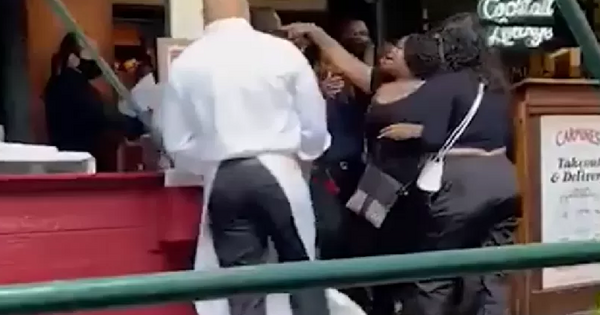 A video circulating on social networks shows the moment three women attacked the receptionist at Carmine’s restaurant in New York, US, after he requested his proof of vaccination against COVID-19, which is required in the city. The images show generalized fighting with slaps and punches at the entrance of the place. Some people stop and try to sort out the confusion. A man seizes one of the attackers, lifts him off the ground and drives him away from the fight.

According to information received from the New York Post, all three customers will be from Texas. After the fight had subsided, a woman who identified herself as the manager of the establishment walked onto the sidewalk with the other two. “He should be fired,” said one involved in the fight, pointing to the receptionist, as reported by NBC.

The victim must have been 24 years old and told the police that she had suffered multiple injuries and a collar was broken. The incident occurred at around 17:00 local time on Thursday (16). According to the New York Post, the incident comes after discussions about the validity of women’s vaccination records. The city requires people 12 years of age and older to present proof of vaccination to enter restaurants.

Officials told the newspaper that the three attackers were identified as Sally Rachel Lewis, 49, Kaita Nkenge Rankin, 44, and Tyony Keshe Rankin, 21. He was charged with assault and criminal damages, but was released without bail. In an official note, the restaurant is sorry for what happened. “It’s a sad situation when one of our employees is attacked for doing his job.”
The indoor food vaccination requirement became effective August 17, and enforcement, which includes fines of up to $1,000 for a first offense, began last Monday (13).

See also  What is Doxing, the target of a dispute between Hong Kong and the tech giants technology