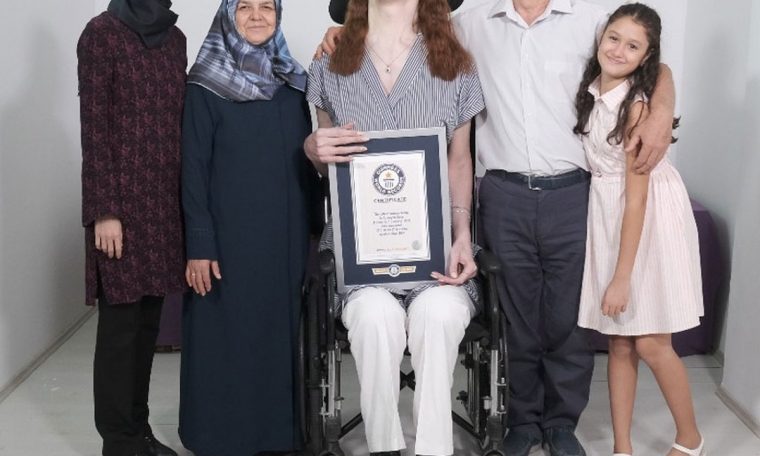 Turkey’s 25-year-old Rumesa Gelgi has been confirmed by the Guinness Book of Records as the world’s tallest living woman at 2.15 meters tall. it was already announced The tallest teenager alive in the world in 2014, but it has increased even more from the time when it was 2.13 m.

Your height is due to a rare genetic disease called Weaver syndrome, which causes physical changes other than accelerated growth.

Gelgi is unable to walk normally due to his physical problems. She spends most of her time in a wheelchair, although she manages to take a few steps with the help of a walker.

Rumesa Gelagi has her height checked by a judge from the Guinness Book of Records – Photo: Breeding / Guinness World Records

The young woman says the title is important because, since she got her first record in 2014, she has used notoriety as a platform to publicize her syndrome and try to help those who Suffering from similar problem or other rare conditions.

She says she has a habit of being surprised when she hits the streets, and that most people are polite and ask to take pictures with her. In addition, she usually receives affectionate messages on social networks – as opposed to bullying her when she was younger and unknown.

The Guinness Book released strange records from the 2022 edition

Interestingly, the world’s tallest living person recognized by Guinness is also Turkey. Sultan Kosen is 2.51 meters tall, but his height is due to the pressure of the tumor on his hypothalamus (an area of ​​the brain). Gelgi says that he never had the opportunity to meet Kosen, but would like to meet him.

However, the young Turkish woman is not the tallest woman ever to receive this title. It previously belonged to the Chinese Yao Defen, who reached a height of 2.34 meters as a result of a tumor in the pituitary gland. However, Defen died in 2012 at the age of 40.