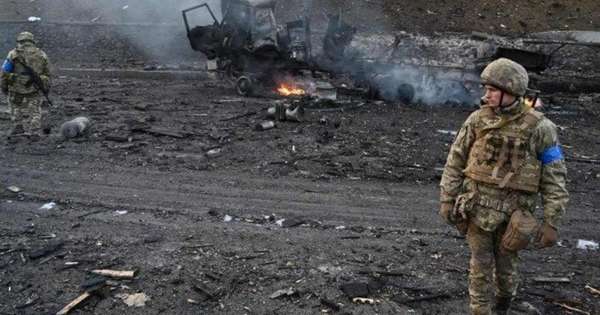 This Monday (28/2), Kyiv updated the number of Russian soldiers killed (dead or wounded) since the start of the attack ordered by Vladimir Putin on Thursday (24/2) to more than 4,500. Moscow, on the other hand, did not confirm the number of victims, but admitted for the first time yesterday that “there are heroes” who were killed or wounded in the conflict.

The fifth day of the Russian offensive is being marked by hopes of a possible ceasefire with the first meeting between the two countries to be held at the border with Belarus. According to a statement published by the Ukrainian president, Ukraine should demand an “immediate ceasefire and withdrawal of Russian troops” in the talks.

Ukraine’s President Volodymyr Zelensky said on Sunday: “The next 24 hours will be crucial for Ukraine.” The President will not be present in the meeting today. The delegation included, among others, the Minister of Defense, Oleksey Reznikov, the Adviser to the Chief of Staff to the President of Ukraine, Mykhailo Podoliak, and the Deputy Minister of Foreign Affairs of Ukraine, Mykola Tochitsky.

Also according to Ukrainian officials, Russian troops are “slowing down the pace of the offensive”. Since the early hours of Sunday, some attacks have been recorded on the outskirts of the capital Kyiv. Kharkiv city, the second largest city in the country. Victims of a horrific attack. The Russians, for their part, are calling for recognition by the government and the people for “their air supremacy” in Ukraine.