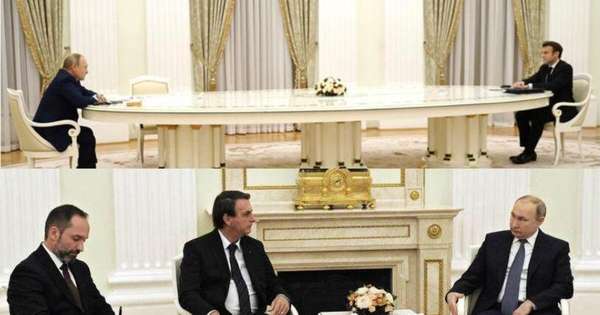 Supporters of President Jair Bolsonaro (PL) are comparing a visit by Brazil’s President to Russia with that of French President Emmanuel Macron. Unlike the French head of state, Bolsonaro sat next to Russian President Vladimir Putin during the meeting.

Bolsonaro’s approach was allowed as Brazil’s president underwent COVID-19 tests and all other health measures required by the Russian government for a meeting with Putin.

Macron has decided not to conduct a COVID test even before going to the Russian representative so as not to give genetic material to Moscow.

The French were offered two options by the Kremlin: conducting a PCR-type test carried out by Russian officials and allowing contact with Putin; or refusal to test, subject to strict social distancing standards.

Bolsonaro had to do 5 COVID tests for the meeting. Earlier this Wednesday (16/2) he confirmed the procedures. The President of Brazil expressed his displeasure over the question of journalists on the matter, saying, “I presented what was agreed in Brazil. Whatever happened here was no different from what was agreed.”

According to the Reuters agency, Macron was tested against COVID, but the test conducted in France was not compatible with the Kremlin’s requirement.

See also  Covid: 16,000 cases of coronavirus missing in daily statistics due to IT error