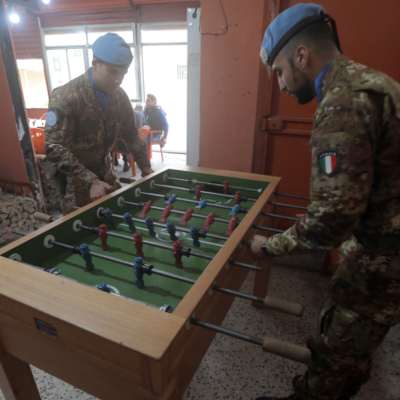 Under pressure from popular disapproval and under the objections of municipalities south of the Litani River, UNIFIL forces to freeze the “spy camera” project for a new week on the pretext of conducting contacts and consultations with the Lebanese state. it was done. Army and United Nations.

The steps taken by residents and municipalities in recent weeks and their blocking against patrolling and technical workshops have more than tenfold, while setting up the infrastructure for a complex network of spy cameras (which is due to be completed next June) International force in the face of a difficult task, amidst rising tensions from the use of force against the people, or bypassing popular disapproval by trying to pressure the Lebanese state.

“Al-Akhbar” obtained some detailed information about the network of cameras that UNIFIL has monitored, with the stated purpose of “protecting its forces”, and with an implicit purpose to support the network of cameras launched by the enemy. Trying to weave for An area south of the Litani River so that international cameras do not cover Israeli enemy cameras. In regions with geographic differences.
According to the information, the international forces intend to build or modify 20 minarets / platforms with a “blue line”, with a height of 20 to 50 meters, with a camera from a thermal camera with a range of 2 to 5 km. Are equipped. With a range of 10 km! Viewing angles range from 100 ° to 180 °, with rotational capacities between 270 ° and 360 °, underscoring UNIFIL’s arguments that the orientation of the cameras is farther south. Not only this, the project involves the deployment of four radars at four locations, whose mission is to monitor the movement of individuals over large areas of the southern Litani region, so that the enemy’s “concerns” related to reaching the “blue line” Can go “Without diagnosis.

Military source for al-Akhbar: The issue of cameras received no official approval from the military

These tremendous technical capabilities place most of the villages south of Litani in the eyes of international forces, and allow them to document the movement in its finest detail, in a dream that the Israeli enemy always worked before the invasion in 1978 is. , And fell forever with a withdrawal from the South on 25 May 2000 under attacks of resistance.
Striking is the silence of some Western media – who donate to protect “UNIFIL” in general, and the Hebrew media, which always acts as a deterrent to international forces and inciting Lebanese and monuments, or more of them Shame to push towards the extreme situation – from mentioning recent objections, which were usually classified under the title “impediment to freedom of movement” and entrusted the responsibility to Lebanon.
Israel’s eagerness about the success of the cameras project, and international concern through UNIFIL, is of importance that they should remain silent about the monuments’ response and try to stay away from the media in fear of the project’s failure Should, or even threaten the full presence of international forces in southern Lebanon.
Contrary to what was promoted by the Italian military commander, Italian General Stefano del Col, that the Lebanese army had pre-approved the project, high-ranking military sources confirmed to «Al-Akhbar» that the «issue of cameras Obtaining no official approval from the military », and« The idea of ​​the cameras was passed months ago, during a public meeting with the commander of international forces, the military leadership, without any details and without telling anyone. Prior approval, “while other sources confirmed that” Dell Colonel complains about the popular movement and addresses the file through the media. “
While the interceptors have halted the second part of the project, that is, the beginning of work with the drone, the resistance drone is a major concern for the enemy and western forces, which, through UNIFIL, also attempt to track the movement. are doing. airplane.
Today, international forces have three mobile air radars to the south, two of which are currently in two locations for international forces (one is for the western region and the other is for the eastern region of the operational area), while the work is currently underway. The third radar is in position to fill specific gaps in the eastern region. International forces have recently conducted radar experiments in the city of Abel al-Saqi, and they plan to use a fourth ground radar from the French military, which also contributes to cover the gaps, but between these phases The cooperation agreement requires specific amendments to France and international force.

The international forces intend to build and modify 20 towers, which range in height from 15 to 50 meters.

As the most prominent step in the planning of the air radar network, it is a project to bring Germany into a new German ship after receiving command of the naval force from the Brazilian force, which is on a special radar to monitor the circulation of air. . Land at low altitudes, with a clear goal of monitoring the work of resistance drones, regardless of where it was said. The goal is to control air traffic in general. As all violations of the Israeli enemy do not push international forces to take any position, they are satisfied with the policy of “counting”! While this resolution considers any Lebanese move to violate 1701 and resort to responsibilities, given that “Israel” would always guarantee international forces at intelligence level to protect the movement of their aircraft in airspace. is.
At the same time, international forces are themselves practicing a series of aerial violations of overflight regulations. Some of its aircraft depart through designated routes between Beirut and the South, and they fly in areas with populations below 500 meters and uninhabited areas at altitudes above 300 meters, in addition to flying over prohibited areas, such as Triangle of Palestinian camps (Rashidih – Al Basa – Burj Al Shamli)), contrary to the rules. UNIFIL also supports the use of some drones for filming outside its sites, and is responded to every time the Army demands that aircraft do filming for media reports or documentaries.
Will UNIFIL continue the cameras project, showing “people’s anger”, jeopardizing its entire mission? Or will the enemy’s interest in the international forces remaining on the land of the South become the details, and UNIFIL will withdraw from the project to retain its role? Answer in the coming months or weeks.