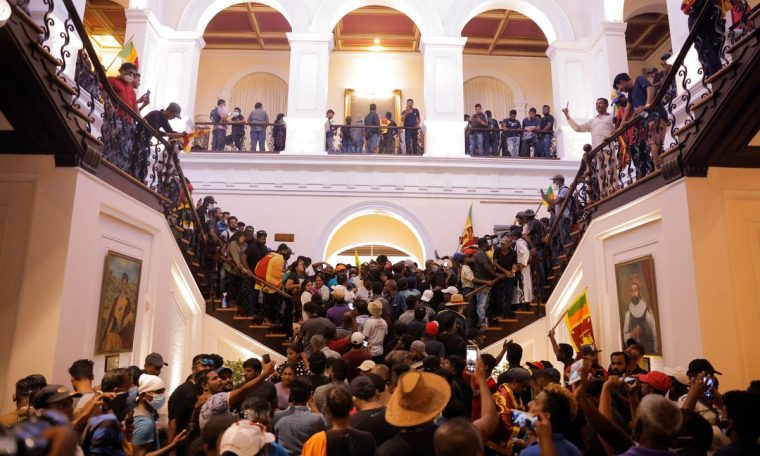 Thousands stormed the President’s official residence in Colombo, Sri Lanka, this Saturday (9). There is an economic crisis in the country, and public demonstrations have been taking place for months.

TV footage showed protesters breaking open the gates of other government buildings such as the President’s Secretariat and the Finance Ministry.

They demand the resignation of President Gotabaya Rajapaksa. According to Defense Ministry sources, he was not at the official residence since Friday due to security reasons.

The army and police tried to stop the protesters from entering the buildings, but failed.

Prime Minister Ranil Wickremesinghe has called an emergency meeting of party leaders to discuss the situation and arrive at a quick solution. He asked the President to convene Parliament, the statement said. Wickremesinghe has also been shifted to a safer place.

A Facebook Live broadcast from inside the president’s house showed hundreds of protesters, some clad in flags, crowding halls and corridors, chanting anti-Rajapaksa slogans.

Protesters in the garden of the Presidential residence in Colombo, Sri Lanka on July 9, 2022 – Photo: Reuters

Protesters broke into the swimming pool of the official residence and photos were shared on social networks.

People also kept roaming in the field outside the building.

At least 39 people, including two police officers, were injured and hospitalized in the protests.

Without tourism, the country ran out of dollars

Sri Lanka is a country of 22 million people in Southeast Asia.

The economic crisis started because the country is short of dollars, and thus unable to import fuel, food and medicine.

It is considered the worst economic crisis since independence in 1948.

Inflation reached 54.6% in June and is expected to reach 70% in the coming months.

The government is negotiating a US$3 billion loan with the International Monetary Fund, restructuring part of the external debt and seeking to borrow money from international bodies.

Sri Lanka’s economy is heavily dependent on tourism for dollars, and with COVID-19, the country has been left without its main income. Besides, the government was already in debt. The situation has worsened with the rise in oil prices. Last year, the government banned the import of chemical fertilisers, which devastated agriculture. In November, re-purchase was allowed.