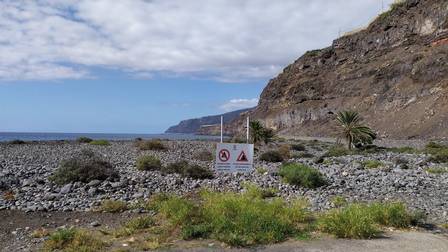 La Palma – The eruption of the Cumbre Vieja volcano in the Canary Islands not only destroyed nearly a thousand homes and spread over 350 hectares, it also destroyed a beach in La Palma famous for its “perfect wave” for surfers Gave. Known for its rugged terrain and volcanic rocks, Los Guerres is covered by a mass of hot magma about 500 meters wide and 700 meters long.

As more than 80,000 cubic meters of lava ejected, spilling into the ocean, the landscape once crowned by its tall cliffs becomes unfamiliar to the eyes of its patrons. The venue has also been the stage for championships in the Canary Islands, which attracted a good portion of the population.

“It was a magical wave, real magic. The wind didn’t even change. It was protected by the rocks that sheltered it. It was the perfect beach for all kinds of surfers because it was shallow. That’s why the lava flows so fast.” It’s accumulating,” Angel Lobo, president of the Surfing Federation of the Canary Islands, told the newspaper El Mundo. – We had five Canarian Championships there, which was great. A lot of people came from the area, they set up food stalls, there Groups were playing. Often our championships are attended by contestants and their families. But here comes the whole city. Well, they have come.

Unlike other famous beaches, such as those in Nazareth, Portugal, Los Guerres was considered ideal for all surfers. In normal days, it was not usually found by many people. No wonder it was called “crystalline” by the residents of La Palma. Now water has a new color.

According to the latest assessment, the lava has already destroyed 880 homes and affected another 105, which may still be submerged. One of them is the “Hope House”, which, despite being surrounded by a ravaged landscape, remained intact. Last Wednesday, the owner couple announced that the construction had collapsed. More than 6,000 people have already had to be evacuated.

Amidst this scenario, Minister of Tourism and Sports Raul Camacho launched Campaign to encourage travel To the island devastated by the explosion. In a message posted to the social network, he says one way to help the community is to “travel and consume” there.

The appeal came hours after the island’s tourism association reported a significant picture of mass cancellations and a hotel network occupancy rate of around 15%.

The ejected lava reached the sea Tuesday night and formed a “pyramid” of about 50 metres. Since then, magma has gained an area of ​​about 20 hectares (200 thousand m) in the Atlantic Ocean. According to the European Earth Observation Program Copernicus, the island developed over 338 hectares of surface.

Officials urged residents to step out of their homes and avoid approaching smoke plumes. The use of masks and goggles were also recommended to avoid inhalation and contact with eyes due to the release of toxic gases.

Volcano Came into activity on the Sunday before last, which has not happened since 1971. According to Involcan, the eruption of Cumbre Vieja May lasts 24 to 84 days. The projection takes into account data from past eruptions on the island of La Palma. The average duration of the event is 55 days.