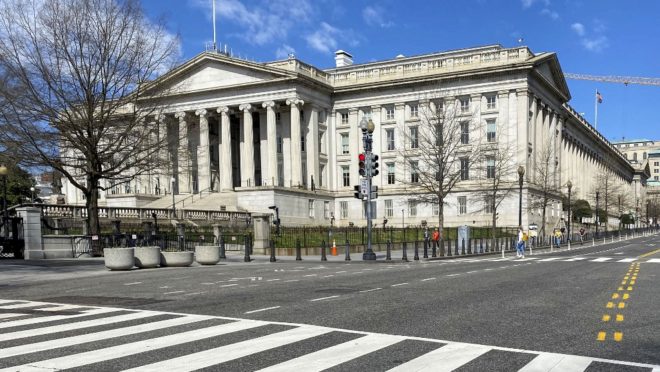 US President Joe Biden’s government recently proposed an international agreement to adopt a global minimum tax for corporations aimed at preventing multinationals from transferring their profits and jobs to countries that offer lower taxes. .

US Treasury Secretary Janet Yellen said earlier this month that she was working with the G20 countries on an agreement for minimum corporate taxation, which, for her, “ended a race in tax rates downward Will help that is already up to 30 years “.

The plan would be able to raise $ 2 trillion, without it, “going out of the country,” Yellen said in an article for it Wall Street Journal.

Part of the proposal to establish a global minimum rate for trade Tax Transformation Plan for US CompaniesPresented in early April and called “Made in America”. Organizations of wealthy countries, such as the G20 and the Organization for Economic Cooperation and Development (OECD), were already taking initiatives to adopt an international minimum tax.

Biden talked about the proposed 21% global minimum tax for companies. “This means that companies will not be able to hide their earnings in tax havens in places like the Cayman Islands and Bermuda,” the Democrat said in an April 7 speech. “We are also going to end the deductions used by companies to outsource jobs and transfer assets abroad. They move jobs abroad, transfer assets abroad and whatever they earn there. They do not have to pay taxes on them. “

How will it work?

Countries adopting the system can set their own corporate tax rate. But a national company that is part of its operations in a foreign country You have to pay your local government the difference between the taxes paid in that country and the global minimum rate..

“Although countries have strong incentives to work together to fight tax competition, they will not hold the race down, unless a large number of large economies adopt a minimum tax on foreign income,” by the government. The plan presented says.

What will be the minimum fee?

The OECD has previously stated that governments generally agree with the idea of ​​minimum global taxation, but the question of what will happen to that rate is still unanimous.

The Biden government intends to increase corporate taxation in the US to 28% and propose that the global minimum rate be 21%. The minimum rate in the previous discussion at the OECD was 12.5%.

Over the past few decades, governments in various locations such as Ireland, Switzerland, the Cayman Islands, the Netherlands and Hong Kong have implemented tax policies to attract investment from low-tax multinationals. Many multinationals shifted their operations, including their area of ​​intellectual property, to places that tax – or nothing – on their profits.

Giants such as Google, Apple, Amazon, Facebook and Nike use networks of subsidiaries that transfer profits from large markets to these low-tax areas.

About 60% of the profits of these US companies seeking tax havens are currently registered in these places, Richard Murphy, co-founder of Tax Justice Network, estimated in an article for this article financial Times. Economists also reported that about 20% tax charges in the United States have shifted from corporations to individuals since 1945, a trend they described as “continuous”.

According to the US Treasury, tax misuse by multinational corporations results in a loss of approximately $ 49 billion per year Tax Justice Network Report. Germany and France are also among the countries that lose the most in absolute numbers.

However, a global minimum tax does not guarantee the elimination of competition between countries to attract international capital, warns Daniel Boon, vice president of the Tax Foundation in Washington. “People have talked about ending tax competition, but whether there is competition for taxes or anything else, competition between countries for mobile capital and labor resources will continue,” Boon said. Voice of america. “And if you discontinue fiscal policy, you may end up with a system of countries offering direct subsidies for business investment.”

What was the reaction in the United States?

The Biden government’s proposal is a major change in the stance that the United States had adopted as long as the sovereignty of taxation of countries.

The Washington initiative is expected to intensify the debate in the OECD and a multilateral agreement could be signed in early June this year. But the deal would need to be approved by the US Congress, where Democrats have a majority in both houses to be effective in the United States.

Democrat Ron Wyden, Chairman of the US Senate Finance Committee financial Times Biden’s proposal should serve as the basis for a global settlement. “I have had two goals for the OECD process for a long time: eliminating discriminatory taxes on digital services and implementing a global tax system that treats US companies fairly. Achieving both of these goals in the new Treasury proposal Has the potential. ” Said Viden. He said that the proposal could ensure that our multinational corporations are encouraged to invest in the United States and pay their fair share.

The director of the House Forms and Means Committee, also a Democrat, supports Biden’s plan.

But the opposition has already indicated that a bipartisan agreement on this issue will not be easy. The Financial Times reported that House Republicans expressed skepticism about the White House initiative in a letter sent to Yellen.

“We are concerned that OECD changes could directly reduce US tax revenue and leave the door open for continued attacks by US companies and other countries on our domestic tax base,” said lawmakers, who also argue that 21 % Will be the global minimum rate. Too much and will put American workers and companies at a competitive disadvantage compared to other countries.

Groups representing US business interests have also shown dissatisfaction with the plan, particularly as a possibility of raising taxes within the Biden administration, Voice of america.

Business roundtable president Joshua Bolten said the organization’s members support the government’s intention to ensure that the international tax system creates a more level playing field for American companies operating globally, according to the publication. But, he said he needed the US to “secure a deal” with other countries participating in the plan to ensure that they impose a minimum tax on their companies, and that the US should conform to the minimum tax Minimum tax. Global.

Critics of the plan also argue that the United States cannot be confident that countries that have a history of undemocratic rule (such as Russia) and human rights violations (such as China) will follow the rules so as to appropriate American businesses and workers Be treated. Quite as Alex Hendry, director of Americans for Tax Reform, told in an article The hill.

What was the international response?

If the US government succeeds in its proposal, many countries, including Europeans, could suffer billions of dollars in income, in addition to job losses resulting from the closure of the headquarters of these companies in those countries.

For example, Ireland has been very successful in recent years in attracting investment from American technology companies such as Google, Facebook, Microsoft and AirBnB, with the proposal that they pay only 12.5% ​​of the profits in the country do. This benefit would be at risk if Biden’s proposal is approved.

In an interview with the Irish network RTÉ, Irish Finance Minister Pascal Donahue said he did not believe the United States was specifically targeting his country. “I have been saying for years that this moment will come. It is happening now, and it will have consequences. This can have a significant impact on how we conduct corporate taxation in Ireland and where taxes are collected, ” They said.

Germany and France, which charge more than 30% of fees, have long complained that Ireland is an injustice to the rest of the European Union. Both countries and other Europeans support Washington’s plan, as does the European Commission, which argued that the global minimum rate should be fixed after discussing the OECD.