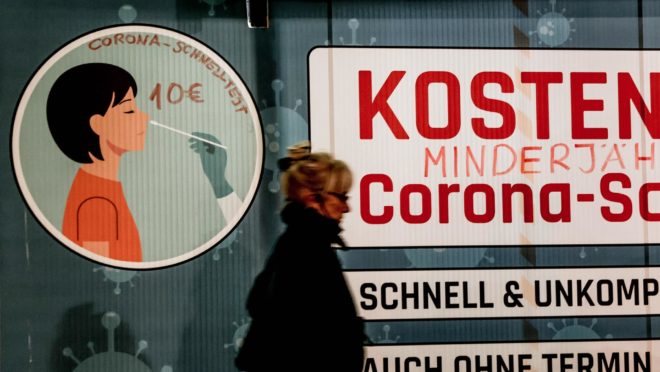 Germany on Tuesday (9) recorded the highest incidence of new cases of Kovid-19 since the start of the pandemic. Data from the Bulletin of the Robert Koch Institute (RKI), a federal agency and institute responsible for disease control and prevention in the country, shows that there have been an average of 213.7 new infections per 100,000 residents in the past seven days.

Asked by Focus magazine, RKI attributed the rise in infections to two main factors: the easing of restrictions to fight the pandemic and a significant proportion of the population that has not yet been vaccinated.

As of Monday, 67.2% of the German population had been fully vaccinated and 69.7% had received at least one dose of a vaccination agent – ​​in France, 75% have a full immunization programme, and in Spain, 79%.

A survey conducted by the Forsa Institute for the Ministry of Health and released in late October showed that 65% of unvaccinated people in Germany do not intend to be vaccinated against COVID-19 in the next two months.

Another survey conducted by Morning Consult, a global data intelligence company, showed that 11% of Germans do not want to be vaccinated, which is lower than only Russia and the United States among the 15 countries surveyed.

Last week, Health Minister Jens Spahn announced that a “fourth wave (of Covid-19) is in full swing” in Germany and that the country is experiencing a “non-vaccination epidemic”.

Although the protection provided by vaccines is far below the country’s average of disease deaths in seven days (more than 800 in January), it has already risen from 57 deaths last Monday to 128 on October 8 . According to a report by DW, doctors fear that the number of patients admitted to the ICU may double in the coming weeks due to Kovid-19.

The German government is already considering rolling back some of the sanctions relaxations. According to DW, one of the measures that has been considered is that people without vaccination can no longer go to public places only with the presentation of negative tests.

The leaders of the three parties negotiating the formation of the next German government’s plan to present in the Bundestag, federal parliament next week, a package of measures that, according to information from Bloomberg, would aim to avoid tough restrictions such as closing schools and curfews. aims at. ,

In Saxony, whose minister-president Michael Kreischmer told Deutschlandfunk radio there was a risk of “a lockdown like last year”, this week people without vaccinations were banned from visiting restaurants, cinemas and bars.