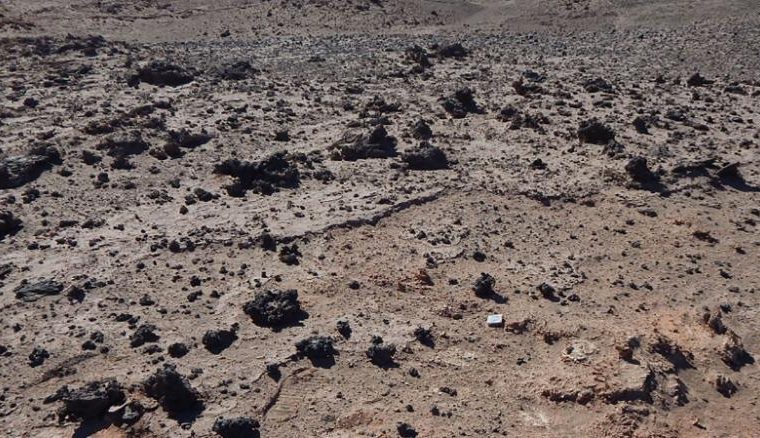 The Atacama Desert in Chile has been used to simulate and study life in the atmosphere outside planet Earth, as Mars planet. Now, a recent study has revealed that researchers believe the desert was the site of an ancient comet explosion, intense enough to form giant slabs of silicate glass.

The research was published Tuesday (2) in the journal “Geology”.

About 12,000 years ago, intense heat turned the sandy soils of the Atacama into vast swaths of glass that stretched for 75 kilometers. Until now, scientists weren’t sure what caused this dramatic change.

The Atacama Desert is the driest desert region on Earth, with very little humidity or rainfall. The fractured glass of the desert consists of tiny mineral particles often found in meteorites that landed on Earth.

The minerals in the glass combined with particles collected by NASA’s Stardust mission, which took them from a comet named Wild 2. Researchers believe that the Chilean desert minerals are the ones left over after the explosion of a comet similar to Wild 2. over the sand and melted it.

“This is the first time we have clear evidence of glass on Earth that was created by thermal radiation and winds from a fireball just above the surface,” explained Pete Schultz, study author and professor emeritus of geological sciences at Brown University. ” Brown’s Department of Earth, Environmental and Planetary Sciences. “To have such a dramatic effect over such a large area, it was a really big explosion. Many of us have seen bolide (bright meteor) fireballs swaying across the sky, but they are tiny spots in comparison.” “

Areas of glass, striking in dark green or black, span an area to the east of the Pampa del Tamarrugal plateau, located between the Andes and the South Pacific Coast mountains. Although volcanic activity may have created this type of glass, there is no evidence to prove it. that the Atacama Glass was created by volcanoes.

In the past, researchers have suggested that ancient fires were the cause. The area once hosted wetlands with grass obtained from rivers. Had that old forest burned down in a widespread wildfire, it could have been proved that the fire had made the glass.

However, the glass itself is more complex than that generated by common fire. Up close, it looks like the pieces of glass were bent, bent, rolled and melted while they were still molten. For researchers, this would only be possible with an air blast that could intensify the winds like a tornado.

A chemical analysis of the glass revealed zircon, minerals that thermally decompose to form wand crystals. This change can only happen if the temperature is above 1,600 °C, which will certainly exceed the heat generated by the fire in the grass.

The analysis also found minerals such as cubanite and trilite, both found in Comet Wild 2 and meteorites.

“These minerals tell us that this object has all the traces of a comet,” study co-author and planetary geologist Scott Harris of Georgia’s Fernbank Science Center said in a statement. “The same mineralogy we’ve seen in the samples of stardust contained in these glasses is really powerful evidence that what we’re seeing is the result of a cometary air explosion.”

Researchers want to date Glass to determine its exact age as well as the likely size of the comet, but their current expectation is that the impact occurred 12,000 years ago, consistent with a time when large mammals disappeared from the area. Were.

“It’s too early to say whether there was a causal relationship, but what we can say is that this event happened around the same time that the megafauna is believed to have disappeared, which is intriguing,” Schultz explained. “There is also a chance that it was first noticed by residents who had just arrived in the area. It must have been a tremendous spectacle.”

(Translated text. click here to be read in original English).