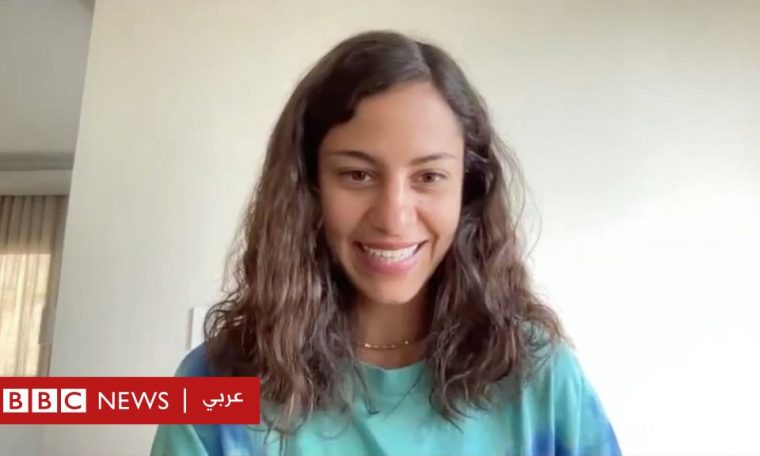 At Cairo International Airport, Basma shouted to her friend that the employee sitting there was taking pictures of her without her knowledge. She then ran with her husband and her friend’s husband to catch him when he fled.

Shortly before that, the employee was sitting at the top of an office in the customs area, holding his phone, his lens pointed at passengers, twirling his legs as he watched everyone take their bags to the airport. Putting on cars. This is how Basma began his story in his interview with BBC Arabic.

Basma Beshai became the heroine of a video clip she published crying while she was at the airport to help her friends, as the clip became a topic of discussion on social media after millions of views, and Egypt prompted the Public Prosecution. Cairo Airport Administration to take immediate action.

Basma tells us that what irritated her, as seen in the video clip, is that the employee was “treating her with a chuckle, as if she believed it was impossible to harm her by the act.” ..”

Basma says, “He was steady and confident, and I didn’t feel like he was shaken up when I came across him, and my complaint didn’t have enough interest initially from the people concerned at the airport, so I published the video clip.” that I may find someone to help me.”

But Basma hadn’t imagined that the clip would spread like this, garnering millions of views in a limited number of hours, and she was prepared to immediately end the story in front of her if the employee apologized to her and removed the photos she had taken. given, and those are what he had not originally indicated to do.

“I’m not the only one who was photographed at the airport.”

The next day, Cairo Air Port suspended the employee from work and withdrew his customs declaration, until the completion of an investigation by the relevant authorities, following a dispute that the video clip had erupted.

As the clip made its way to viewers, many of whom expressed great sympathy, Basma was still inside a room in Cairo airport, on her husband’s coat, with airport security officials at about 2:15 pm. Was writing a report on the incident till 00 o’clock.

Basma had come with her husband and two of their friends from an entertainment trip in Beirut for a week, and she says that her husband saw the picture on the employee’s phone and took it from behind, explaining that it was on the phone. was not the only photograph, but that many Egyptians and foreigners were photographed in the same way.

Less than two days after the incident, the Egyptian Public Prosecution ordered a Cairo airport employee to be detained for four days pending an investigation, and asked her to be photographed without a girl’s consent and of her sanity. Sent to criminal trial for violation.

Nihad Abu Kumsan, the lawyer and director of Egypt’s Women’s Rights Center, says the employee’s allegation depends on the prosecution’s description of the incident, but in any case, the accused faced the crime of either taking photographs that he was not authorized to take, which is an offense under the Communications Act, or the exposure of a female camera for the purpose of obtaining sexual advantage.

Egyptian Public Prosecution had questioned the employee about how to “expose her in a public place by taking two photographs without her consent to show places on her body with intent to gain advantage of a sexual nature”. was held responsible.

Basma Bishai remarked with a smile: “Without the conversation on social media it wouldn’t have been this way and without the momentum. I am very happy.”

However, the accused airport employee denied this, and prosecutors’ investigation stated that he had taken the photographs for the purpose of documenting the crowd in which the victim was to present to his superiors, the way they appeared, He denied his intention to take his picture. .

Nihad Abu Qumsan clarifies that the penalty for filming for the purpose of sexual gain, if it is proved that it has taken place, may extend to a fine and imprisonment for a term of up to one year.

The director of Egypt’s Women’s Rights Center praised the response to the incident, stating that girls were more willing to disclose, as many of them feared society’s blame.

Basma returns, saying: “This persecution was not the only one in my life, but it was not the worst either.”

The “Airport Girl” goes on to say that she cannot go by car on the streets, which are full of people without making contact with her husband on the phone all the way, and also does not go to public places like government offices apart from her husband. is. .

A study by a UN research group in 2013 reported that 99 percent of women in Egypt have been victims of harassment.

But local reports say this may be an exaggeration.

Waves of revelations on social media about incidents of sexual assault have been active in Egypt over the past months, sparking widespread controversy, and authorities calling for legal and fact-checking measures to amend the law. has been transferred.

Less than a year later, Egypt’s parliament passed a law prohibiting investigative authorities from disclosing the identities of those who report sexual assault, breaking social norms that prevent them from complaining about sexual assault. Encourages disclosure of customs and dispelling them. .

Abu Qumsan praises these measures, but calls for good follow-up to their implementation, raising awareness and training the people in charge of public places to deal with incidents of sexual assault to protect the rights of victims.

All incidents that appear with the same force on social media in Egypt revolve around physical or verbal abuse, so Basma’s incident comes to the fore as it is considered by many to be a photographic attack.

Nihad Abu Qumsan believes that considering photography as a form of sexual harassment for all of them signals an increase in awareness, as girls are aware that there are many forms of harassment that are not necessarily tactile and verbal. be limited.

Egyptian law defines sexual harassment as any act that violates modesty and reaches the victim’s body and affects her private parts to an extent that is obscene, which she can protect and prevent from people. leaves no stone unturned for

Basma ended his interview with the BBC by saying that his feelings were mixed between his willingness to punish those he loved and his sympathy for his wife and children, but added: “I never have my right. I will leave, especially with all the messages I have received from women hoping for such a victory later. I am just like them. I need this victory.”