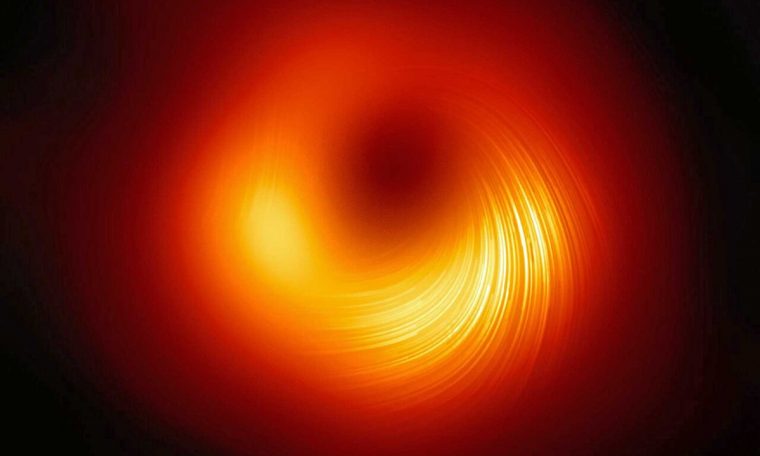 Astronomers had revealed the first black hole in the eyes of the world, which were able to capture the image of the magnetic field on its edge in order to better understand this mysterious cosmic monster – according to a study released on Wednesday (24) .

On April 10, 2019, the supermassive black hole in the center of the Messier 87 (M87) galaxy, located 55 million light years away, appeared to us as a black circle, surrounded by a flaming ring.

Thanks to the International Cooperation Event Horizon Telescope (EHT), the historical image was the most direct evidence obtained by the existence of black holes, objects so large and compact that nothing escapes them, even light No.

Two years later, after analyzing the data collected in 2017, EHT scientists know more about the mechanics of the supermassive object, which is several billion times the mass of the Sun. His work was published in The Astrophysical Journal Letters.

And a new image of the object was released into polarized light – through a filter that helps separate part of the ring of light.

“The polarization of light contains information that allows us to better understand the physics behind the image seen in April 2019, which was not possible before. This is a big step,” said Ivan Marty-Vidal, Coordinator of one of the work groups. Researchers at EHT and University of Valencia (Spain).

“We saw exactly what the theoretical model predicted, which is incredibly satisfying!”, Commodoret Geth, deputy director of the Institute for Radio Astronomy, Milimrada (IRAM), whose telescope is part of the EHT network.

The polarization revealed the structure of the magnetic field at the edge of the black hole and made it possible to produce an accurate image of its shape, similar to the tornado of filaments.

This extremely powerful magnetic field – much higher than that of Earth – counteracts the black hole’s resistance to gravity: “There is a kind of balance between two forces, like a fight, even if in the end, the winner is gravity”. , Explains the astronomer.

“The magnetic field at the edge of the black hole is strong enough to help repel hot gas and withstand the force of gravity,” explains Jason Dexter of the University of Colorado, Boulder, USA.

Nothing once comes out of a black hole when it is swallowed (“collected”). But the cosmic ogre, however powerful it may be, “does not swallow 100% of everything in its environment: one part survives”, develops the CNRS researcher.

The part of the case that is not captured – about 10% – is extracted, and the magnetic field plays a fundamental role in this mechanism. “The story will follow a trajectory along the lines of the field”, Frederick Guith continues.

Therefore the magnetic force not only allows matter to be ejected, but also ejects powerful jets of light at a huge speed that extends at least 5,000 light years beyond the galaxy.

According to ESO (European Southern Observatory), these energetic jets coming from the origin of M87 are “one of the most mysterious events in this galaxy”.

READ  Asus ends up with screws to fix M.2 SSDs on its motherboard

The forces discovered by the EHT are believed to act on the smallest black hole located at the center of most galaxies, including the Milky Way.

No information escapes the black hole, we will never see them directly. “What happens inside will remain a mystery. Therefore, the challenge is to understand as much as possible what is going on around it, as it is necessarily interconnected”, concludes the researcher.

The annual session of simultaneous observation of the EHT network, canceled last spring (Borel) due to the Kovid-19 pandemic, is expected to resume in late April. The inclusion of new telescopes, including the Nova Observatory at Eram in Houts-Alpes, will further improve the accuracy of the images obtained.