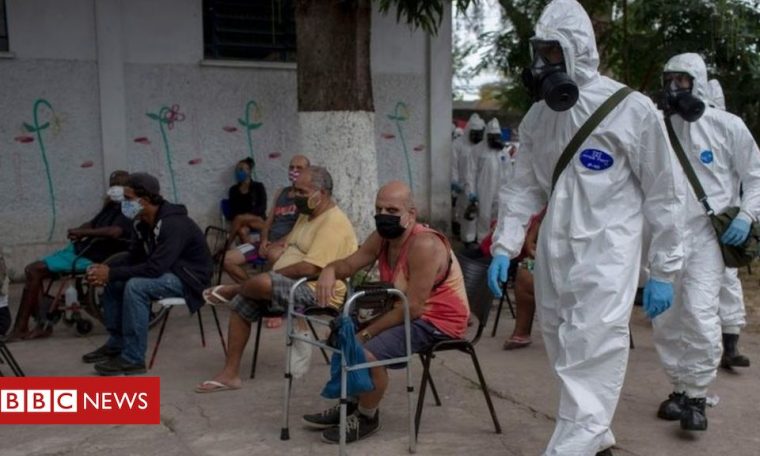 Coronavirus cases have been rising sharply in many Latin American countries and health authorities there say it’s now the epicentre of the global pandemic.

Brazil has had more than 800,000 confirmed cases – the second highest in the world.

Other countries in the region, including Mexico, Chile and Peru, are also struggling to contain major outbreaks.

With new confirmed cases in the US plateauing and many European countries reporting declining numbers, what are the trends in Latin America?

The first confirmed case in Latin America was identified in Brazil on 26 February, although researchers have said there are indications that there were cases there as early as January.

Coronavirus has since spread to every country in the region.

More than 1,500,000 cases have been recorded, and more than 70,000 people have died, according to the European Centre for Disease Control and Prevention.

This is fewer cases and deaths than in Europe and the US, but testing is nowhere near as widespread and deaths may be under-reported.

Latin America’s two most populous nations, Brazil and Mexico, have seen the highest number of deaths, more than 40,000 and 15,000 respectively.

Peru has the 8th highest number of reported cases in the world, and more than 6,000 confirmed deaths.

And researchers say these countries could be significantly under-reporting deaths, with many cases going undiagnosed.

Chile is reporting thousands of new coronavirus cases each day, with more than 2,600 people dead.

Ecuador has seen the most deaths per capita in the region – with around 22 per 100,000 people. Reported daily cases in Ecuador have been stabilising, but this is not the trend in many other countries in the region.

Peak not yet reached

Unlike in the US and most countries in Europe, many countries in Latin America are seeing their daily cases and deaths increase.

Looking at Brazil, Mexico and Peru compared with two of the worst hit countries in Europe in terms of deaths – the UK and Italy – you can see daily deaths are growing in these Latin American nations as they drop elsewhere.

The head of the Pan American Health Organization, Dr Carissa Etienne has warned that coronavirus is spreading “exponentially” in many areas of the region.

The number of deaths in Brazil, Mexico and Peru is doubling roughly every two to three weeks.

A study by the University of Washington has warned that the Brazil’s death toll could climb to 125,000 by early August – that’s a three-fold increase from its current recorded tally.

Dr Etienne, has said “there can be no doubt our region has become the epicentre” of the pandemic.

Latin America now consistently reports more daily cases than the US and Europe.

And experts say the peak of the epidemic in some Latin American countries is still some weeks away.

As daily cases continue to rise, there are concerns that healthcare systems could be overwhelmed, as has already been the case in Ecuador.

Pilar Mazzetti, who is leading of the Peruvian government’s coronavirus response, has said: “We’re in bad shape. This is war.”

This information is regularly updated but may not reflect the latest totals for each country.

** The past data for new cases is a three day rolling average. Due to revisions in the number of cases, an average cannot be calculated for this date.

What is being done to stop the spread?

Mexico and Brazil have continued to take less severe lockdown measures than other Latin American countries.

Both have given out guidelines, but have not imposed national restrictions.

Marcia Castro, a global health professor at Harvard University, says that “the response in Brazil is far from ideal, and currently there is a lack of a uniform message coming from the leadership at different levels.”

Other countries such as Argentina have imposed compulsory lockdowns.

And Prof Castro says it is, along with Uruguay, among the countries in the region for now able to manage the spread.

Peru had one of the first and strictest national lockdowns in the region, but continues to see cases and deaths rise. It has extended its lockdown until the end of June.

As cases rapidly rise in Chile, the government has announced a mandatory lockdown in the capital Santiago.

Chile has one of Latin America’s highest rates of testing – around 40 tests per 1,000 people.

But testing across the region is significantly below other parts of the world.

Brazil also has a low testing rate, and a study by the University of São Paulo Medical School estimates the number of infections could be as much as 15 times higher than the official figure.

President Bolsonaro wants to begin reopening Brazil’s borders despite increasing infections, but other Latin American governments have expressed worries that the worsening situation there could have ramifications across the region.

Send us your questions