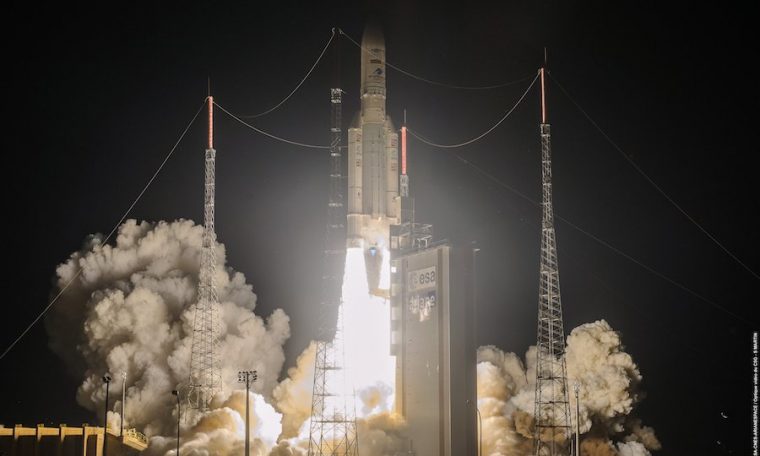 An Ariane 5 rocket delivered a robotic space tug and a pair of commercial communications satellites into orbit Saturday following a fiery blastoff from French Guiana, debuting new upgrades in Arianespace’s first mission since temporarily suspending launch operations earlier this year due to the coronavirus pandemic.

The European Ariane 5 rocket and its three U.S.-built payloads took off from the ELA-3 launch zone at the Guiana Space Center at 6:04 p.m. EDT (2204 GMT; 7:04 p.m. French Guiana time). Riding 2.9 million pounds of thrust from its twin solid rocket boosters and hydrogen-fed core stage engine, the Ariane 5 bolted through cloud layers and arced toward the east from the jungle spaceport on the northeastern shore of South America.

Less than an hour later, the rocket successfully deployed three commercial satellites. It was the 300th orbital launch attempt from the European-run spaceport in French Guiana since 1970.

The Ariane 5’s third launch of 2020 was previously scheduled for July 31, but a sensor problem on the rocket’s core stage hydrogen tank forced Arianespace officials to abort the countdown around two minutes before liftoff.

Ground crews at the Guiana Space Center rolled the rocket back to its assembly building and replaced the sensor last week, then returned the Ariane 5 to the launch pad Thursday.

Once the winds improved, the countdown resumed and the Ariane 5 fired off its launch pad, exceeded the speed of sound in less than a minute, then shed its two side-mounted strap-on solid rocket boosters nearly two-and-a-half minutes after liftoff.

Flying due east, the rocket jettisoned its Swiss-made payload fairing around three-and-half minutes into the mission, when the Ariane 5 reached an altitude above the thicker, lower layers of the atmosphere.

After nine minutes, the Ariane 5’s core stage shut down its Vulcain 2 engine and dropped away, leaving the rocket’s cryogenic upper stage HM7B engine to finish the task of placing the mission’s three satellite payloads into an egg-shaped geostationary transfer orbit stretching more than 22,000 miles (nearly 36,000 kilometers) over the equator.

The HM7B engine switched off nearly 26 minutes into the flight, and the Ariane 5’s upper stage began maneuvers to release its payloads in orbit.

The first satellite to separate from the Ariane 5 rocket was the 7,270-pound (3,298-kilogram) Galaxy 30 communications satellite. Owned by Intelsat, Galaxy 30 will provide commercial video and television broadcast services across North America.

Built by Northrop Grumman, the satellite also carries an L-band Wide Area Augmentation System payload for the Federal Aviation Administration to support navigation services for civil aviation in the United States, including precise altitude and position data for airplanes departing and arriving at busy airports.

“Today’s launch of Galaxy 30 demonstrates Intelsat’s long-term commitment to our North American media customers,” said Stephen Spengler, Intelsat’s CEO. “At Intelsat, we’re constantly innovating, investing in and upgrading our satellite fleet and terrestrial infrastructure. Galaxy 30 is a great example of how we help our customers stay ahead of evolving consumer demands, today and well into the future.”

Galaxy 30 will use its on-board liquid-fueled engine to reshape its orbit more than 22,000 miles over the equator, where the satellite’s speed will match that of Earth’s rotation. Intelsat plans to park the satellite at 125 degrees west longitude before it begins commercial service.

Positioned below the Galaxy 30 satellite during Saturday’s launch was Northrop Grumman’s second Mission Extension Vehicle, a robotic satellite servicing craft designed to link up with another satellite in geostationary orbit.

The MEV-2 spacecraft, weighing 6,338 pounds (2,875 kilograms) at launch, separated from the Ariane 5’s upper stage a few minutes after Galaxy 30. MEV-2 follows the MEV-1 mission launched in October 2019 aboard a Russian Proton rocket.

The MEV-1 mission docked with the Intelsat 901 in February, locking onto the satellite after accomplishing the first docking between two commercial satellites, and the first-ever linkup between two objects in geostationary orbit. Intelsat 901 was launched in 2001 and was running low on fuel. The Mission Extension Vehicle is designed to take over attitude control of a client satellite and extend its useful life.

After several months of orbit-raising and phasing maneuvers, the MEV-2 mission will perform a similar docking and mission extension service beginning in 2021 for the Intelsat 10-02 communications satellite, which launched in 2004. MEV-2 will provide Intelsat 10-02 with five additional years of useful service life, helping it deliver media and broadband services across Europe, the Middle East, Africa and South America.

“Today’s launch was especially important for Intelsat because Northrop Grumman’s innovative MEV-2 launched alongside Galaxy 30,” Spengler said in a statement. “Intelsat was proud to partner with Northrop Grumman earlier this year to pioneer the future of in-space servicing with MEV-1 and our Intelsat 901 satellite. We’re looking forward to this next exciting servicing mission with Intelsat 10-02.”

With Galaxy 30 and MEV-2 deployed, the Ariane 5 cast away a carbon composite shroud that enclosed the mission’s third satellite passenger — the Japanese-owned BSAT-4b broadcasting station — during launch. BSAT-4b separated from the rocket more than 47 minutes after it took off from French Guiana.

The BSAT-4b satellite, made by Maxar, will be positioned in geostationary orbit at 110 degrees east longitude over the Asia-Pacific region. BSAT-4b will broadcast direct-to-home 8K and 4K ultra-high-definition television services for the Japanese operator B-SAT. The new satellite will be a backup for BSAT-4a, which launched in 2017, helping provide TV broadcasts of the Summer Olympics next year in Tokyo.

Wearing masks to reduce the risk of COVID-19 transmission, officials at the Guiana Space Center celebrated the successful launch with elbow bumps instead of the usual handshakes and high-fives.

The mission Saturday was the first by Arianespace since the onset of the coronavirus pandemic forced a cessation in launch preparations at the European-run spaceport in French Guiana in March. Work on launch campaigns partially resumed in May, and Arianespace planned to launch a light-class, solid-fueled Vega rocket in late June with a cluster of 53 small satellites.

READ  Yellowstone visitors' stress after deafening roar in park: 'What in the earth was that?' | Science | News

But a stretch of persistently unacceptable upper level winds kept the mission from launching, and engineers needed to recharge batteries on the rocket and on some of the mission’s small satellite payloads. Arianespace officials then turned their attention to the next Ariane 5 rocket on the company’s launch schedule.

Saturday’s launch debuted several upgrades to the Ariane 5 rocket, including modified pressure vents on its payload fairing. Engineers will gather data on the changed vent configuration to ensure it meets stringent requirements for the launch of the $10 billion James Webb Space Telescope on an Ariane 5 rocket next year.

The launch vehicle also had a lighter vehicle equipment bay, a part of the rocket that contains the Ariane 5’s avionics and guidance systems. That increases the Ariane 5’s lift capability by about 187 pounds, or 85 kilograms, according to Arianespace.

And the Ariane 5 flew Saturday with a new autonomous location system, which will eventually be used operationally on Europe’s next-generation Ariane 6 rocket. The autonomous system uses signals from Europe’s Galileo navigation satellites to determine the rocket’s location, streamlining range safety requirements, which currently rely on extensive ground infrastructure — such as radars — to track rockets as they depart the Guiana Space Center.

“This launcher was the most capable we have ever launched, with 10.2 (metric) tons available for the satellites,” Israël said. “So many, many innovations tonight for us.”

With Saturday’s launch, there are eight more Ariane 5 rockets left to launch before Arianespace transitions to the new Ariane 6 launcher, according to Daniel Neuenschwander, director of space transportation at the European Space Agency.