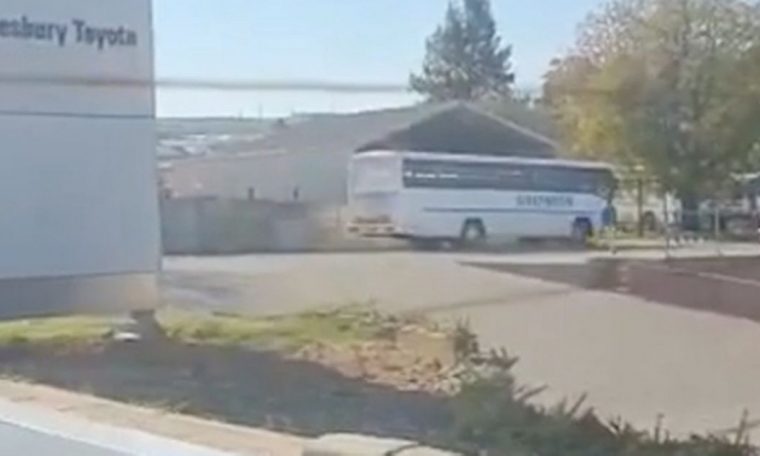 Around 50 prisoners have escaped a jail in South Africa and hijacked vehicles as well as taking a school hostage, according to reports.

Footage shows the inmates, said to be from Malmesbury Prison, running in all different directions near a Toyota dealership.

Some fled in cars, others have taken over a school with terrified children being filmed whispering and hiding under tables.

Police have been seen chasing after the inmates with the deafening sound of gunshots being heard and smoke billowing in the air.

One person wrote on social media: “A number of prisoners have escaped from Old prison opposite Malmesbury police station, some hijacked a small Kia Bakkie and some at Swartland High Schools hostage situation.”

Another added: “45 prisoners escaped from Malmesbury prison. Please be safe if you around the area. They could be anywhere.”

And a third said: “About 50 inmates just escaped from Malmesbury prison across the Malmesbury SAPD a Hyundai H100 reg nr CJ14753 was hijacked.

“The ones in the truck is heading direction Durbanville. Pics to follow. Please be on the lookout if heading those directions and inform SAPD.”

Police are understood to have launched a huge manhunt.

Other footage circulating online shows two men lying on their stomachs with their hands behind their backs as they are approached by police and led into the back of a vehicle.

There are claims 14 have been rearrested.

One woman wrote: “Both my parents are Correctional Officials in Malmesbury. One minute they were off duty and the next phones are ringing, prisoners escaped and they’re back in uniform. C H A O S.”

We’ll be bringing you the very latest updates, pictures and video on this breaking news story.

Please check back regularly for updates on this developing story here at  Mirror.co.uk.