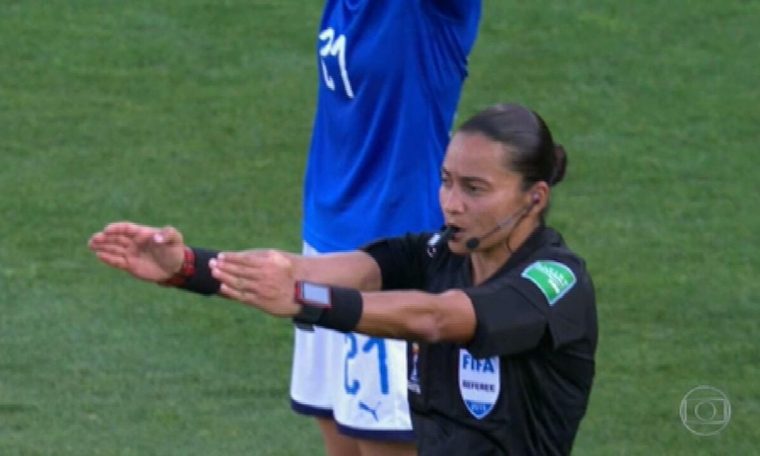 He wears shoes and a full uniform, runs for 90 minutes and collects “trophies” during his career. The next one is already eagerly awaiting the club World Cup. Referee Edina Alves and assistant Neuza Back travel next Wednesday to make history in Qatar: they will compose the first female referee trio in an adult FIFA competition for men.

From there, they hope to bring the ball of the game in which they work, a tradition in the most important matches of their careers, to join the nine who already adorn the wall of the apartment they live in Jundia ( SP).

– They are my medals, my xodós. Serie A Ball of Brazil, who won the Women’s World Cup (France-2019) with a lot of work, which we have four. It is an honor for us, the trophy. Do not doubt that both Nuja and I will do our best to represent our country and bring another ball to the collection – Edina Alves said in an interview give.

For both of them, working in the Club World Cup is a special moment that is already in a trajectory full of achievements. Edina and Nuja were together in four matches of the 2019 Women’s World Cup in France, including the semi-finals between the United States and England. Now, he is a pioneer in the history of world women’s arbitration.

“If I only think about my career, I would say it is a unique moment. But there are many women with us who struggle for victory in life, and also for gender equality. They work in different categories Leaves home every day to do. Activities, and want to do our best. “

– We have to correspond. Just being there to raise the flag is meaningless, just because “ah, let the women take over”. No, football is a great sport, it deserves great referees, and if you are a woman who will be able to give a great referee to the World Cup, then let us be.

Female attendance at important women’s football games has increased in recent years. France’s Stephanie Frappart is one of the main representatives of this “invasion”: the referee of the last Women’s Cup final, she made history in December by becoming the first woman to direct a men’s Champions League game (Juventus 3 0) Dynamo Kiev. 2020) and whistle at the French Men’s Championship for the first time. In Germany, Bibiana Steinhaus began whistling in the men’s Bundesliga in 2017, and led the German Super Cup final (Bayern Munich 3 x 2 Borussia Dortmund) last year.

Palmiras and Santos decide last place in the world

In addition to Edina and Neuza in arbitration, Brazil will also have a representative in the search for the title: Palmeiras and Santos decided the Libertadores in Maracana on 30 January, defining the final category in the World Cup.

The competition in Qatar will begin on 4 February, this time directly in the quarter-finals, with two games: Tigers (MEX) vs Ulsan Hyundai (COR) and Al Duhel (CAT) vs Al Ahli (EGI). Auckland City, who will play the opening game against Al Duhel, Kovid-19 dropped from tournament to save New Zealand’s isolation during epidemic.

The champion of the Libertadores will be the winner of Tigres x Ulsan in the semi-finals. In the other bracket, the winner of the quarter-finals will face European champion Bayern Munich. Neuja, who speaks German, did not hide a certain concern to know the game in which they would work in the World Cup.

– This feeling is natural, but we need to control it, because it only gets in the way. But of course we are already following which teams are classified and you are already like that, will I play this game?

About half of Edina Alves Batista, 41, from Goinaerê to Paraná, is devoted to mediation. She was an assistant for 15 years, and in 2014 she became the principal referee. In 2019, he directed the first game in Serie A of the Brazilian men’s CSA x Goiás, and has now reached 14 in the competition.

At age 36, Neuza Inês Back, from the city of Saudade, in Santa Catarina, is already “experienced” in men’s sports: the assistant has 95 matches played in 12 seasons, playing in Brasileirão , The Copa do Brasil final played in the first leg of 2019, between Athletico-PR x Internacional, and last year he worked for the Copa Sudamericana for the first time in an international men’s match, Penalar 1 x 1 Velez Sarsfield.

– According to a survey, I am the woman who has the most sports in a main male category in your country. If I have all the games, Copa Brasil, Serie B, Serie A do Brasileiro, I hold a lot more sports in men than women – she said.

Entrosman is the property of Edina and Neuza

In addition to international experience, two Brazilians have one additional asset: integration. In preparation for the Women’s World Cup, she shared an apartment in Jundia, as both are now affiliated with the Federation of São Paulo. The residence became an informal whistle, with a field for study and evaluation of sports, and even an “academy”: at the beginning of the Kovid-19 epidemic, adapted to keep the balcony and living room in shape I went. Says Edina.

“The apartment is just another study headquarters, for us to dedicate ourselves to mediation. We change our entire lives to emerge in the profession.”

Going to the World Cup with your friend makes the achievement even more special.

– This is really good, because we already have a relationship. I have already competed in competitions with referees from other countries and it is not the same, it is great when we can go with someone from your country and who we trust – the assistant commented.

Edina Alves and Nueza Back evaluate the games in which they serve as referees and assistants – Photo: Personal Collection

Not last saturday He passed the creepy physical test, Necessary to guarantee a place in the world. Together, Edina and Neuza took the race at the Complexo Desportivo Dutero Nicolino de Lucca in Jundia, and completed the circuit in the required time, the same for men and women, the Argentine subsidiary. Already a trial by Mariana de Almeida. Which club will complete the historic trio of women referees in the World Cup.

– I think it is appropriate that we do physical examination just like men. The attacker would not run short because he would look one way and be a woman. If I want to work with quality, I need to follow his play – said Neuza, who took the test first and then encouraged his friend.

When the CBF referee’s director, former referee Leonardo Gasiba, was called to report, the two were together. He was called into the Club World Cup.

– Nuza was driving, and I was on the edge, we got out of the car, hugged each other, shouted and celebrated. It is as if it was a call for selection to play the World Cup, it is the same sentiment – the referee said.

After the Club World Cup, Edina and Neuza’s next dreams combine women’s and men’s football: going to the Tokyo Olympics this year (Neuza has already competed in Rio-2016) and the 2023 Women’s World Cup in Australia and New Zealand, And who knows in another unprecedented move for women to return to Qatar for the 2022 World Cup.

– The icing on the cake will be to participate in the 2022 World Cup in Qatar. I also believe that it will depend a lot on our performance now. This is a test, yes. I think we are opening this door, and will try to leave it open – Neuza said.