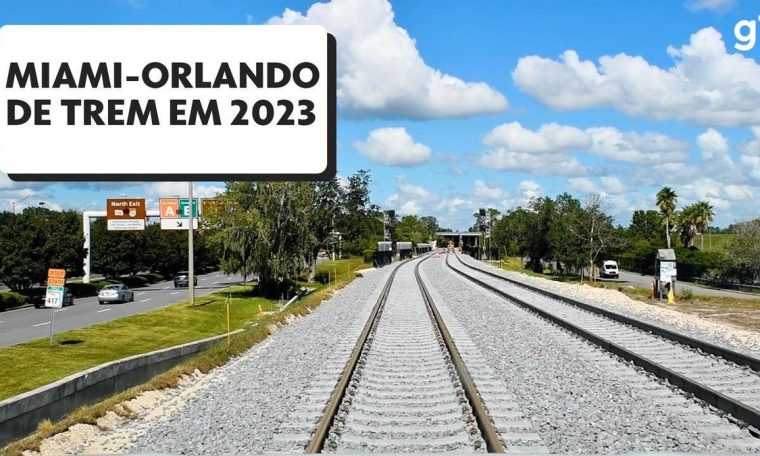 A high-speed train will connect two major cities in the state of Florida in the United States by 2023: miami and Orlando. The work on the new rail route is 70 per cent complete and should be completed by December.

Miami and Orlando are 270 kilometers apart. To travel between the two destinations, there were only two options: a flight that took about an hour or a journey of up to four hours by car.

By then the line was between the cities of Miami, Fort Lauderdale and West Palm Beach, according to the Brightline Railroad Company responsible for operating the trains. Now, there will be an extension from West Palm Beach to Orlando International Airport, which It is about 30 km from Disney and Universal parks.

“The City of Orlando is excited to welcome Brightline to Central Florida. This new service will serve as an important connector between Southern and Central Florida as we continue to expand transit options and work to ensure Make sure that there is reliable transport available to all.”

Also according to the company, the trains will be able to reach a maximum speed of 200 km/h and the journey will take up to three hours. Prices have not been announced yet.

In January of this year, Brightline began daily crew training and qualification testing between West Palm Beach and Cocoa as part of its Orlando expansion.

Over an eight-year period, the Brightline Corridor between Miami and Orlando will result in an economic impact of $6.4 billion by creating more than 10,000 jobs.

Zone 2 of the new rail route between Miami and Orlando — Photo: Disclosure/Brightline

In February, Zone 2, one of the four zones with expansion and considered one of the most complex, was completed.

The built-up area corresponds to a projected dual carriageway that runs under the airport’s active taxiways and through tug roads that cross Orlando International Airport.

Zone 2 of the new rail route between Miami and Orlando was completed in February of this year.

Construction included six bridges, two underpasses, and several improvements to the airport, including a new traffic interchange setup located north of the airport and the airport’s first intersection designed to aid traffic flow.

The steel used in and along the entire length of Brightline’s Orlando corridor is 100% recycled and American-made from Fort Wayne, Indiana.

The new train route between Miami and Orlando — Photo: Disclosure

By 2023, trains traveling through Zone 2 will have access to the airport’s new Intermodal Terminal and Via Expressa Beachline/SR 528.

“Our construction through Orlando International Airport presented one of the most complex construction efforts of the entire project and our successful completion is a testament to partnership, teamwork and innovative thinking,” said Michael, Brightline’s executive vice president of development and construction. Segelis said. A Comment.

Orlando-based Middlesex Corporation acted as the general contractor and built the corridor over 33 months, employing more than 100 employees, who logged more than 419,000 hours.

Brad Friel, director of planning and development for the Greater Orlando Aviation Authority, said, “Including intercity rail service at Orlando International Airport is part of our vision by planning and designing our world-class facilities.”