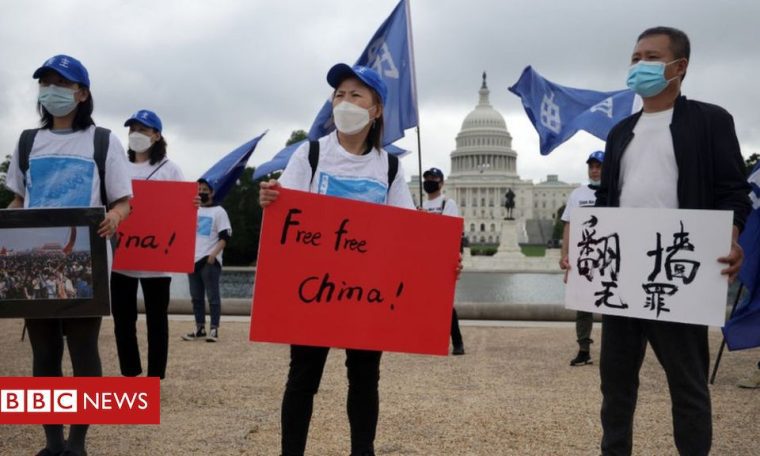 Arthur Liu, father of Olympic figure skater Alyssa Liu and a veteran dissident from California, was not surprised to receive a call from the FBI.

“I was told that the Chinese government had sent spies to the San Francisco Bay Area to obtain information on my and my daughter’s passports,” the Chinese man, who is also an activist against the Beijing government, told the BBC. .

“I wouldn’t say I was shocked, but I thought ‘Wow, they are taking this very seriously’.”

First, Liu didn’t connect the dots after receiving a “suspicious” call from a man claiming to be from the US Olympic and Paralympic Committee. On the call, he said he was conducting “a preliminary review” to travel to the Winter Olympics in February 2022.

“I didn’t really realize it could be someone who wasn’t from the Olympic Committee,” Liu recalled. “I just decided to do the right thing and not give any information. It’s not like we usually submit our passports.”

The voice on the other end of the line, US officials believe, was Anthony Ziburis, a former prison guard and Florida bodyguard.

Their mission was to spy on and discredit Chinese dissidents for Beijing’s intelligence services.

Among the dissidents who were spied are reportedly two US citizens, Liu and Yan Xiong, a US military pastor and congressional candidate who were involved in the 1989 Tiananmen Square protests.

In March, Jiburis was accused by the US Department of Justice of spying for the Chinese government. But he is far from the only one.

So far in the year 2022, US agents have accused at least 12 people, including several US citizens, of harassing and spying for China.

On 8 July, two others were also accused of participating in the same scheme that targeted Liu.

Liu’s case comes at a time of tension in both the US and the UK due to the rise of Chinese espionage activities around the world.

In an unprecedented public appearance at the MI5 campus in London last week, US and UK security services leaders warned of a massive espionage and hacking program developed by China that could exceed all programs jointly managed by other developed countries. .

These plans are seen as part of a larger, growing and multi-pronged effort to give China an edge over its rivals and silence or suppress threats to the Chinese Communist Party government.

Tactics include all manner of tactics, from using hackers to sending spies to the doorsteps of victims.

Former US intelligence agents say the most likely targets are those the Chinese government identifies as the “five poisons” that threaten it.

They are: Tibetan and Uyghur separatists (Muslims who primarily reside in the Xinjiang Autonomous Region of northwest China), the Falung Gong spiritual movement, independence activists in Taiwan and, as in Liu’s case, members of the pro-democracy movement. . in China.

These efforts are expected to grow amid worrying deteriorating Sino-US relations. And American citizens should not be spared either.

For Liu, who fled China via Hong Kong after the 1989 Tiananmen Square protests, the potential for espionage was always present.

A previous attempt ended when he inadvertently befriended a potential agent. It was a student, introduced by a contact with the local Chinese diaspora network, whom he had helped find housing in the US.

“After a year or two, he told me he was asked to spy on me. There was a condition for his coming. [para os Estados Unidos]”, Liu said. “But then he stopped doing that.”

Spying on Chinese citizens living abroad takes many forms: from attempts to hack their emails and devices to placing human agents in their social circles or expatriate organizations.

“You can spy on someone online and figure out their contacts,” said Christopher Johnson, a former CIA chief China analyst. “So maybe you get closer to these people. One thing leads to another.”

Johnson said Beijing attacks dissidents like Liu because it believes they are part of a “global narrative battle” between China and the West.

He said those who speak out against the regime in public could undermine China’s efforts to portray itself positively to the rest of the world.

He said that discussion “has gained more importance over the years”.

“They use an old Marxist term, ‘power of speech.’ It is about the idea that they should tell the story of China itself through their propaganda.”

The Chinese government did not respond to a request for comment on the report.

However, current and former US intelligence officials have repeatedly warned of a major Chinese spying operation on US soil.

In a speech earlier this year, FBI Director John Wray said Chinese espionage operations in the United States are “more brazen” than ever.

According to Christopher Johnson, this reality is especially true because Joe Biden’s government uses the rivalry between the United States and China as part of a global struggle between democracies and autocracies.

One case every 12 hours

According to the FBI, the agency opens a new counterintelligence case related to China every 12 hours. By February, more than 2,000 cases had been initiated.

Despite this, Johnson described US efforts to curb Chinese espionage as “disappointing”.

“They are willing to put in a lot more effort than trying to stop them,” he said.

The FBI estimates that there are “hundreds” of dissidents in the US whom China hopes to target as part of an increasingly aggressive campaign of personal and political vendetta.

“Most of the targets are permanent residents or naturalized citizens – people with significant rights and protections under US law,” Director Ray said.

Liu, for his part, said he didn’t believe his spying efforts would pay off.

However, the most recent attempt had an additional complication.

At the time of the FBI call, his daughter Alyssa Liu was likely to be in Beijing. The skater made posts on her social media criticizing China’s treatment of the Uighur ethnic minority.

Liu admitted that he was “extremely concerned” for her safety, but chose not to tell her about the espionage attempts at the time.

“I didn’t want him to go to China with a heavy burden on his shoulders,” said the father. “I wanted him to go and enjoy the Olympic experience.”

A year later, he says he wouldn’t be surprised if the FBI gets in touch again, though he hopes “not to have to do that again.”

“I learned to behave like a normal person. [o governo chinês] They can do whatever they want, I can’t stop them. I don’t care,” he said.

“I will continue to speak out against certain behavior and human rights violations of any kind. No one will stop me from doing so.”