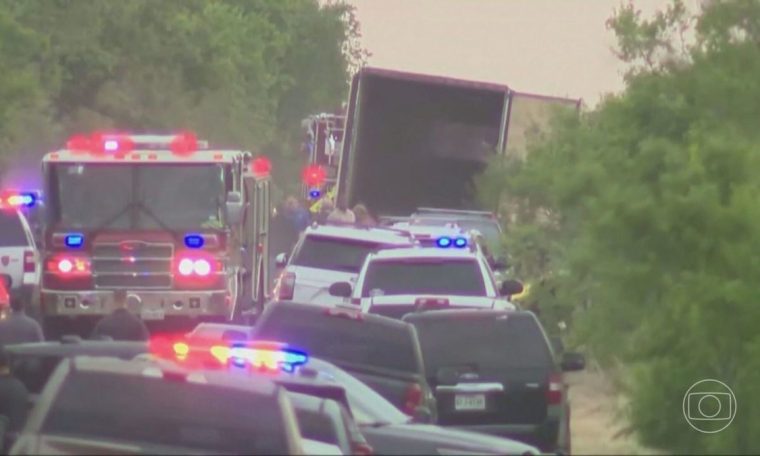 More than 40 people were found dead in a truck this Monday (27) near the city of San Antonio in the United States state of Texas.

Governor Greg Abbott said 42 people had died. However, the fire department said that they found 46 bodies lying inside the vehicle.

Firefighters said no children were among the dead.

Another 16 people were found alive and were taken to area hospitals, according to local government officials. According to firefighters, 4 of the survivors are children.

In the US this Monday (27) more than 40 dead were found inside a truck. – Photo: ABC via Reuters

According to the “New York Times,” the initial hypothesis is that the victims are immigrants. All the people in the trailer are believed to have entered the US illegally.

Officials said two of the survivors were Guatemalans in the group, but there was no further information on the nationalities of the victims and other survivors.

Mexican Foreign Minister Marcelo Ebrard said the Mexican consulate was visiting the scene and the nationalities of the victims were unknown.

The truck was discovered near the train tracks on the southwest side of San Antonio. The city is approximately 250 km from the US-Mexico border.

San Antonio police are looking for the driver of the vehicle, who apparently abandoned the truck.

Three people were taken into custody, but the police did not reveal their connection to the case.

The US Department of Homeland Security took over the investigation.

Police vehicle near the truck where more than 40 bodies were found on June 27, 2022 in the US – Photo: Kylie Greenlee Beale / Reuters

How the people died is not yet known. A heat wave is blowing in this area of ​​Texas – this Monday the temperature was recorded at 39.4ºC. There was no water in the place where people were sitting together.