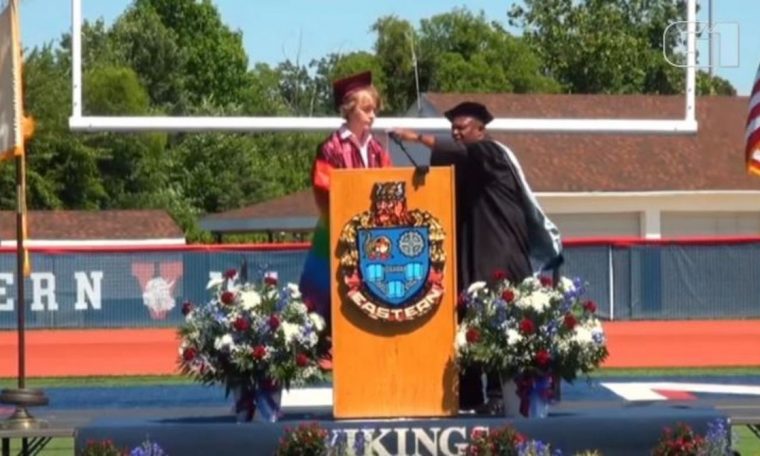 A high school student’s graduation speech was interrupted when she began talking about her experience as an LGBTQIA+ student last week (watch video above).

Bryce Dersham, who was the class speaker, said he was censured by the principal of Eastern Regional High School in New Jersey, America.

“I felt like they were trying to control my point of view, and taking away the parts of my identity that I’m really proud of,” Dersham said in an interview with NBC.

The recording of the speech shows a clear technical problem when it comes to young people being gay – or not binary, who do not identify with the male and female genders.

It is then possible to see school principal Robert Tull approaching and removing the microphone and papers, which would be accompanied by a “rejected” version of the speech.

The listener then demands that the young person be able to speak again and the speaker is given a new microphone who ends his presentation “from memory”.

“He pointed to the speech he had written for me, and told me that I should speak what was there, nothing more,” Dershem said.

Bryce Dursam, graduation speaker who interrupted his speech when he talked about being an LGBTQIA+ student – Photo: Reproduction

Dersham said that a week after graduating, the board told him that the moment was “not a therapy session” and that his speech could not be presented.

The young man said that he worked with teachers on the content of the “forbidden version” and tried to use inclusive language. He also studied past speeches.

“He’s talked about being the son of immigrants, band rehearsals, school clubs, reality shows, even Bob Esponza,” the speaker said.

The area’s school superintendent, Robert Cloitier, said in a statement that he supports students in their educational experiences and believes in “an inclusive message about the future.”

The school principal did not comment on the matter till the last update of this report.