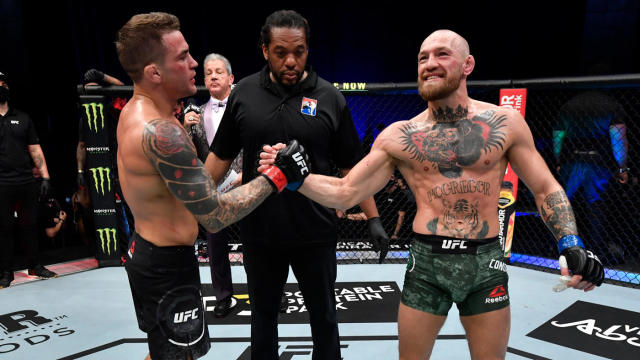 The 264th edition of Ultimate Fighting Championship has now been confirmed for the T-Mobile Arena in Paradise Nevada on Saturday July 10. After more than a year of cancelled and behind closed doors events, UFC 264 could potentially welcome back a full house with fans expected to take full advantage of available ticketing.

But it’s not just the return of crowds that will make this version of UFC a notable one. The promoters have been filling up the card but they’ve already inked in a headline bout that will be tough to match.

One of the more recent additions to the card at UFC 264 is a welterweight battle between Carlos Condit and Max Griffin. Both men are in good shape coming into this contest with two-fight win streaks ahead of their match up.

Also confirmed is another welterweight battle between Gilbert Burns and Stephen Thomson. On another night, this bout might have earned top billing but there’s just too much competition at UFC 264.

Ultimate Fighting Championship always look to put up an intriguing women’s battle and they’ve done it again with a flyweight bout between Jessica Eye and Jennifer Maia. The women are also represented further down the card by Irene Aldana and Yana Kunitskaya in the bantamweight division.

There may be some tweaks to be made between now and the 10th of July but the remainder of the undercard currently reads as follows:

There are some fascinating match ups within that undercard and it should be another thrilling night of MMA. However, it’s unlikely that any of those supplementary battles will be able to replicate the drama of the headline act.

There’s no doubt that the highlight of UFC 264 has rightly received main billing. Completing a trilogy of fights that dates all the way back to 2014, ‘Notorious’ Conor McGregor steps back into the Octagon to face Dustin Poirier as the two men go head to head for the third time in their career.

With one victory apiece from those head to head stats, it’s shaping up to be a close fight and UFC 264 odds reflect that theory. In some places, both Poirier and McGregor are listed at the same odds to win the fight so we could be in for one of the most memorable contests of all time.

Conor McGregor’s latest comeback to the world of MMA didn’t quite go according to plan as he went down to Poirier at UFC 257. Outside of the sport, ‘Notorious’ is the better known fighter, globally, and he has a marginally better record.

The tale of the tape shows that McGregor has 22 wins from 27 fights with 19 of those victories coming via knockout or technical knockout. Both men are the same age but Poirier has the greater experience with 34 pro MMA fights. Of those bouts, he’s won 27 with 13 coming by knockout or TKO.

They may look evenly matched but Dustin Poirier is in the ascendancy and is currently ranked number one in this division. McGregor, by contrast, is feeling his way back into the sport.

The Best of the Undercard

Of the many intriguing battles on the UFC 264 undercard, the fight between Carlos Condit and Max Griffin is arguably attracting the most interest. Both men are at the veteran stages of their respective careers and will be looking to prove that they still have a future at this level.

Another fight to look out for is the middleweight match up between Dricus Du Plessis and Trevin Giles. It may not look to be the most glamorous contest on the card but these are younger, up and coming fighters who look to have big futures in UFC.

Originally scheduled for UFC on ESPN before Du Plessis ran into visa issues, the battle is back on the card and this could be the most technically brilliant and dramatic fight of the evening.

Take in the Action

Anyone in the Nevada area who is interested in attending UFC 264 should keep checking for updates on the potential release of tickets. If they’re not released or, if viewers are simply too far away to attend in person, there will be extensive global TV coverage to compensate.

In the US, early preliminary rounds and the main card itself will be shown on ESPN while those with a UFC fight pass can also watch those early preliminaries. There is huge interest in this type of event so, for other parts of the world, it’s all about checking out the usual Pay Per View sports providers.

There will be lots to enjoy throughout the night which will start on Saturday evening, July 10th, Pacific time. By the time that Conor McGregor and Dustin Poirier make their way into the Octagon, we may well be in the early hours of Sunday morning.

It promises to be a great card with some entertaining bouts, but there is one very special battle between two great fighters which should round the night off in style.