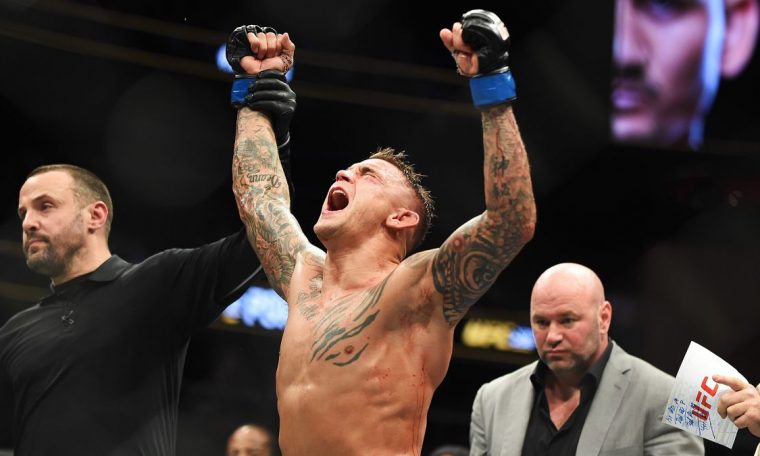 Before UFC goes on its heavily-hyped vacation to Abu Dhabi and Fight Island in July, there’s still time for one more Fight Night card at the promotion’s homegrown Apex facility in Las Vegas, Nevada. And it’s a doozy, too, featuring a headline bout between two of the top-ranked lightweights in the world. Follow our guide as we explain how to watch UFC Fight Night and live stream Poirier vs Hooker online today from anywhere in the world.

UFC Fight Night: Poirier vs Hooker takes place on Saturday, June 27 at the Apex Center in Las Vegas, Nevada. The main card starts at 8pm ET / 5pm PT – which is 1am BST early Sunday morning in the UK. A great value BT Sport Monthly Pass lets you watch every UFC event including PPVs for just £25 in the UK, while in the US a FREE Sling Orange trial will get you access to ESPN and therefore today’s card.

American MMA fighter Dustin ‘The Diamond’ Poirier (25-6) is one of the most highly regarded lightweights around, having been an Octagon mainstay since 2009. He’s currently ranked #3 in his division and is a former UFC Interim Lightweight Champion. His last fight saw him feature in UFC 242’s headline bout last September, where he lost to the formidable Khabib Nurmagomedov. Prior to that, he was on a six-fight winning streak that included a TKO of Tony Ferguson’s conqueror, Justin Gaethje.

His opponent, Dan Hooker (20-8), hails from New Zealand and is currently ranked #5 in the UFC lightweight hierarchy. He’s on a three-fight winning streak of his own heading into tonight’s clash, with 10 of his career victories coming by knockout. It’s his second main event appearance on the trot, and the Kiwi no doubt knows another strong showing will put him the discussion for a title fight sooner rather than later.

Read on as we explain how to watch UFC Fight Night online and live stream Poirier vs Hooker from anywhere in the world.

How to watch UFC Fight Night from outside your country

UFC fans wanting to watch Poirier vs Hooker and all the rest of today’s Fight Night action may find they run into trouble if they’re abroad. This is because geo-blocking restrictions are likely to prevent you from accessing your usual streaming service if you’re not in its country of origin – but there is a solution.

It comes in the form of a VPN – a nifty piece of software that helps you get around digital borders and regain access to the services you normally use and pay for at home. But which one is right for you?

We’ve tested all of the major VPN services and we rate ExpressVPN as the absolute best. It’s compatible with loads of devices including iOS, Android, Amazon Fire Stick, PlayStation, Apple TV and such, and we found it secure, speedy and simple-to-use.

Those are just some of the reasons it’s the best all-round Virtual Private Network for streaming events like UFC Fight Night live from abroad. Another is the fact that it comes with a 30-day money back guarantee and 3-months FREE, so you can see if it’s right for you with no strings attached.

Once you’ve registered and downloaded the software, just follow the prompts to install it then select the location you want to relocate your IP address to – it really is that easy. Check out ExpressVPN today.

UFC fans in the US will likely know that ESPN has the rights to the MMA promotion’s live events, so it’s the place to watch Fight Night: Poirier vs Hooker online tonight. The prelim action starts at 5pm ET / 2pm PT, with the main card getting under way at 8pm ET / 5pm PT.

ESPN will be broadcasting Fight Night on its linear TV channel, as well as its streaming-only platform, ESPN+, which means that cord cutters can watch all the action with an over-the-top service.

Two deals currently stand out to this end.

The first is Sling TV – and more specifically, its Orange bundle, which includes ESPN and is currently offering a FREE trial so you can watch UFC Fight NIght tonight without paying a penny. It normally costs $30 a month if you decide to keep it.

See also  Soon and in a few days.. WhatsApp without internet connection and other new features, only on one condition

The other option to consider is streaming stalwart Hulu, where ESPN is available as part of the Hulu + Live TV package – normally $54.99 for a complete cable replacement service, you can also grab a FREE 7-day trial to watch all the action from the Apex tonight.

Any US residents away from home at present can follow our advice above and use a VPN to access coverage just as they would back in America.

How to get a UFC Fight Night: Poirier vs Hooker UK live stream

In the UK and Ireland, BT Sport has the exclusive broadcast rights to UFC events – including UFC Fight Night: Poirier vs Hooker tonight. Coverage of the main card starts at 1am BST early Sunday morning, with prelim action getting underway at 11pm. Subscribers can stream all the action online via the broadcaster’s website or app.

For cord cutters, BT now offers the option of watching BT Sport without locking yourself into a lengthy contract by way of its £25 Monthly Pass.

This not only gets you access to tonight’s full Fight Night card, but will also cover all forthcoming UFC events – including, based on recent experience, the usually expensive UFC 251 pay-per-view. It’s also got a handful of Premier League matches and exclusive coverage of the Champions League when that returns, so grab a great value BT Sport Monthly Pass today.

if you’re from the UK but happen to away from home right now, you can still live stream your usual UFC coverage from abroad – but you’ll need a VPN to relocate your IP back to the UK as per our guide above.

In Canada, the broadcast rights for UFC Fight Night events are held by TSN, which can be easily accessed via your TV, online or by using the TSN app. Access costs as little as CA$4.99 a week or $19.99 a month, with coverage of the main Poirier vs Hooker card starting at 8pm ET as in the US.

And just like in other countries, any Canadians abroad always have the VPN option at their disposal when out of the country.

How to watch UFC Fight Night: live stream Poirier vs Hooker in Australia

Fight fans Down Under may already know that ESPN Australia has the broadcasting rights to UFC. Events are available on pay TV via Foxtel and therefore also through the Foxtel Now streaming service.

ESPN coverage starts at 6.30am AEST on the morning of Sunday, June 28 – with the main Poirier vs Hooker card scheduled to kick-off around 10am.

For cord cutters or anyone else looking to save a buck, another great way to watch UFC in Australia is by taking advantage of the 14-day FREE trial on offer through Kayo Sports, which has coverage of this weekend’s UFC Fight Night.

Aussies away from home at the moment can always tap in to the powers of a good VPN to watch UFC and anything else just as if they had an ice cold VB in hand.

Kiwis are likely to be interested in today’s UFC Fight Night due to the presence of Auckland-born Dan ‘The Hangman’ Hooker atop the card.

And it’s ESPN again for live UFC Fight Night coverage – which in New Zealand, means turning to Sky Sport.  ESPN 2 is the channel you need, and coverage starts at 10am NZST on the morning of Sunday, June 28.

Existing subscribers can watch online using the country’s Sky Go service, while cord cutters and anyone else can try the Sky Sport Now streaming-only platform – where a weekly pass costs just $19.99.

Kiwis away from the islands can use the VPN route described above to tune in to their service of choice just like they would at home.