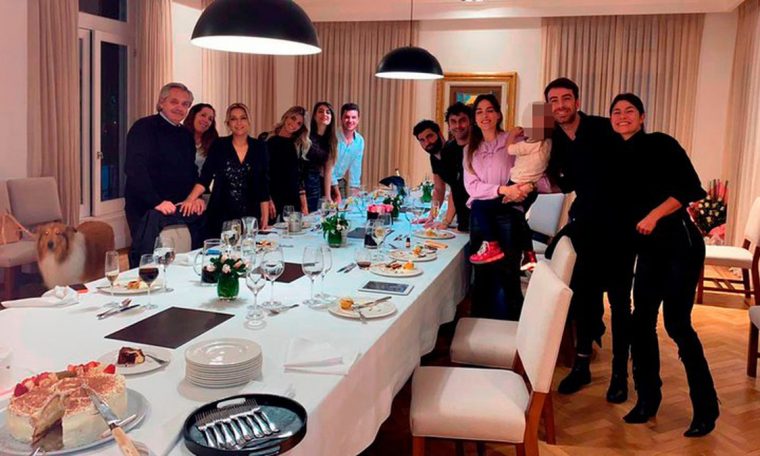 However, when the country expected an apology and even a self-report in court, Fernandez underestimated the violation of social distancing rules and decided to focus the blame on his wife.

The president said, “I’m sorry for what happened. It won’t happen again.”

The incident may have happened if a decree, which he himself had signed, was in effect prohibiting meetings and movement of people while wearing masks and enforcing social distancing.

Deputy Mario Negri, Leader of the Opposition in the Chamber and one of the authors of impeachment requestCriticized the President of Argentina: “It is not a gentleman to blame his wife. It was not a mistake,” he said.

“The president did not explain why he lied to Argentina by refusing social gatherings and went into his own labyrinth,” Negri said.

“A pardon for a crime is not enough. Still, the president simply said he was sorry as if it was enough,” said opposition deputy Facundo Suárez Lastra.

inequality before the law

A 14 July 2020 birthday photo of First Lady, Fabiola Yanez, reveals a secret party without any protective measures. In the picture, apart from the one taking the picture, there are 11 people around a table with dinner, birthday cake and champagne.

At the time, the government announced that “the first lady’s birthday, as it is in the middle of a pandemic, would be ‘zoomed’ and would be wearing a mask.” The ad was accompanied by a picture of a solitary Fabiola Yanez with a flower arrangement.

The truth that has now come to the fore is not merely evidence of a violation. The list of attendees at the presidential residence during the height of confinement in Argentina includes a series of guests during Alberto Fernández’s birthday night on April 2, 2020.

There are records of dozens of first lady visits by hairdressers, while hairdressers in the country were forced to remain closed for seven months.

The president’s dog received dozens of training sessions while schools across the country remained closed. Dozens of guests went to the President’s residence when movement was prohibited for the meetings to be held virtually.

The confession of a party in complete quarantine leads Alberto Fernández to the legal consequences he himself declared, after participating in his writings as president and as a criminal lawyer.

Articles 205 and 239 of the Penal Code, in which Alberto Fernández mentions each new proclamation of the renewal of imprisonment, have established prison sentences of six months to two years for those who violate measures that prevent the epidemic. prevent the introduction or spread, and one year in prison for defiance of a right above.

“To the idiots I want to tell them that Smart’s Argentina is over,” Fernandez said a few days before his wife’s party. “We are talking about people’s health and I will not allow them to do what they want. Anyone who does not follow the quarantine will be criminally prosecuted.”

One of the opposition leaders, Patricia Bulrich, questioned the ethics of the action and the maintenance of Alberto Fernández’s government.

“While the Argentines were in mandatory isolation, the president attended parties, violating the decrees that he defined himself,” Bullrich said. “It is a criminal matter, but it is also a moral one. How does a government run without moral authority?”

The opposition filed a request for dismissal on Friday (13) accusing Alberto Fernández of poor performance and possible offenses during the exercise of his functions.

“We propose an institutionalized process of political judgment against President Alberto Fernández for his poor performance in the management of the pandemic and for the offense of violating the measures taken by the competent authorities to contain the spread of the pandemic,” the text says.

The impeachment order also included other possible political offenses such as so-called “vaccine diplomacy”, which opposed the purchase of vaccines from US laboratories, and “VIP vaccination” which The privilege of vaccination of politicians and friends of power without respecting the priority for groups and health workers at risk.

The head of the Cabinet of Ministers, Santiago Cafiero, defined the secret party at the official residence as “a mistake” and accused the opposition of making “political use” of the situation during the election campaign for the legislative elections in November.

When defining policy measures on scientific grounds, infectious disease physician Pedro Kahn, one of President Alberto Fernández’s advisers, was dismayed as to who else should set an example.

“I didn’t see my grandchildren and children for several months. We all faced sanctions. My friends died without me being able to say goodbye to them,” compared Kahn.

Argentina had the longest and strictest quarantine in the world for 233 days in 2020, which, however, did not prevent the infection of 5.074 million people and the deaths of 108,815 of them.